Thanks to Facebook, I have recently been in contact with Wendy, a woman who was in my fifth grade class at Belmont Boulevard School way back in the 1961-62 school year. We had not seen nor heard from one another since the end of sixth grade, when, due to the way the district was set up, I (and a very few classmates) moved on to Elmont Memorial while the rest of the class went on to Alva T. Stanforth JHS and then Sewanhaka HS.

Among the photos on Wendy's page is the one above, with many members of the class and our teacher, Miss Carroll. (That's yours truly second from the left in the top row, wearing the very fashionable bolo tie.) Fifty years after it was taken, it's not easy to put names to the faces, though I find I remember one or two more each time I look at the photo.

I was only in Belmont Boulevard for fifth and sixth grade.My kindegarten through fourth grade years were spent in Elmont Road School, the smallest building in the district, but also the closest to my home. As a result, I was a "newcomer" in fifth grade, among students who had already been together for half a decade and in spite of this (or, perhaps, because of it), I was elected president of our class.

Memories are fuzzy now, but at one point during the year, some of my classmates wanted to "impeach" me. I remember Miss Carroll sending me out of the room on an errand so that she could discuss this with the rest of the class. She sent me to another classroom with a note, where the teacher kept me waiting for about fifteen minutes and then handed me a stapler to bring back to Miss Carroll. I certainly hope neither teacher thought I was fooled about why I was being sent out of the classroom, especially after Miss Carroll took the stapler I'd brought back and put it on her desk right next to her own stapler. In any case, after the class meeting that took place in my absence, there was no more talk about my being "removed from office."

I have no idea where any of the other members of the class are, what they've done in the ensuing half-century, or if our lives have intersected along the way. But Facebook is an amazing thing, so who knows when the next classmate will turn up?
Posted by Bob Rozakis at Tuesday, December 27, 2011 2 comments:

The Secret History of AA Comics 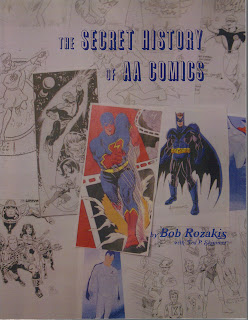 Shameless Plug Department: The Secret History of AA Comics is now available in trade paperback form at lulu.com. You can order a copy by clicking on the link in the column on the right.
This alternate history of the comic book business -- in which M.C. Gaines bought out the owners of DC Comics, Green Lantern and The Flash were the premier heroes, and Superman and Batman were reimagined to start the Silver Age -- appeared in somewhat different form in issues of Alter Ego and Back Issue. There is additional text material as well as new artwork included in this version.
Posted by Bob Rozakis at Thursday, December 15, 2011 1 comment:

Publishing and the Booksellers

It's no secret that the publishing business has been in trouble for a long time. Just last week, McGraw-Hill announced that some 550 people would be losing their jobs. Of the many people Laurie has dealt with in her long career as a writer, very few are still gainfully employed in the publishing business. Book packagers and publishing companies have closed up shop as their work dwindles down to nothing.

One of my close friends, a printer his entire life, closed his family-owned printing company more than a decade ago and went to work as a sales rep for another printing company. That company was bought out by another printer and was then sold to yet another firm. He retired this year and is quite happy that he no longer has to deal with the daily grind of pursuing printing work in an ever-shrinking market.

In the comic book business, sales have been steadily dropping since a peak in the mid-1990s. Unit sales that fifteen years ago would have been considered too low and grounds for cancelling a title are now hailed as best-seller numbers.

Bookstores have been victims of this as well. Local book shops succumbed to the big-store chains like Borders and Barnes & Noble, which in turn were undersold by Amazon. Borders is now gone, leaving B&N as pretty much the only brick-and-mortar franchise left.

But you have to wonder how much longer they will be around when you see their current TV commercial. It features Jane Lynch of "Glee" fame and a crew of B&N "staff" singing about how you should come into the store and buy a Nook. Of course, once you buy one, you never have to go into the store again because you can then order all your books (and plenty more) as downloads!

While you're there, wish the salesperson good luck in his or her new career outside the bookselling business.
Posted by Bob Rozakis at Wednesday, December 14, 2011 2 comments:

Another Saturday Morning at the Blood Center

One of the ways that Long Island Blood Services recognizes regular donors is with the two posters listing everyone who has made more than 75 lifetime platelet donations. Those with 75-99 or 100-149 -- and there are hundreds of them -- are on one poster. Those with 150 or more are on the other, which we've laughingly called the "Big Board."

Last Saturday. a few of us regulars were sitting in the canteen and discussing where we were on the posters. Deb, the appointment coordinator, started to laugh and said, "It's always the guys who know exactly where they are and how many more donations they need to move to the next group." I can't speak for all "the guys," but those of us who were present agreed. Steve, who is just shy of 150, has calculated that he will move to the Big Board when it is updated next September. Tom knew exactly where he stood.  And I know I have a chance of jumping from the 150-199 group to 200-249 if I find enough Saturdays in the next ten months.

This morning another of the regulars was happy to see that he had made it to the Big Board. He mentioned that he thought there were  more categories this year and I pointed out the lone man in the 350+ category.  Deb has mentioned that the man is 80 years old and continues to donate regularly; clearly, he is the gold standard we are all striving for.

As I was sitting there, I did a little math. The 142 people on the Big Board have, at a minimum, made 23,000 platelet donations! That does not take into account the "doubles" and "triples" done in a single donation -- some donors are just so chock full of platelets that they can give extra.

I've mentioned it before, but it's worth repeating: There is no artificial substitute that can be used, yet only 2% of the population donates. If you donate, even just once or twice a year, great! If you never have, please consider trying.  Regardless of whether the donor is a long-time regular or a first-timer, every pint of blood and unit of platelets makes a difference in someone's life.

And donating is a great excuse for eating Lorna Doones for breakfast.
Posted by Bob Rozakis at Saturday, December 03, 2011 1 comment:

News of the Day

What is probably the best copy of Action Comics #1, the 1938 comic book that featured the debut of Superman, has sold at auction in Philadelphia for $2.16 million. Though the identities of the buyer and the seller are being kept secret, it is apparently the copy that was stolen from Nicolas Cage back in 2000.
After being off the radar for more than a decade, the book was discovered in an abandoned storage shed in California last April.

Most articles about the sale include the factoid that there are only about 100 copies of the book left in existence. I have no idea where they came up with that number, but back when I started at DC Comics in the '70s, the guess was that maybe two dozen were still out there. Of course, that guess was no more scientific than the one used today. In any case, it will probably remain a guess because I suspect that the people who own one aren't about to advertise it.

==
For whatever reason, today seems to be a day for lists making the news.  Among those I've come across this morning are:
* America's 30 Druggiest Colleges
The University of Colorado leads the list, followed by Dennison College in Ohio and Dartmouth (which I guess can now claim to be the "highest"-ranking of the Ivy League schools). Also on the list are five campuses of the State University of New York (Fredonia, New Paltz, Oneonta, Oswego, and Purchase). None of the schools on this list made it onto this next one...

* America's 10 Unhappiest Colleges
The students at the New Jersey Institute of Technology are apparently the unhappiest of all. Also on the list are the students at the Merchant Marine, Coast Guard and Naval Academies. The students at Indiana University of Pennsylvania also made the top ten, perhaps because they are not sure which state they are in.

* The 10 Saddest Cities in America
St. Petersburg, Florida tops this list but its residents can cheer up just a little by driving over to Tampa, which ranked as #4. Detroit and Memphis are in between. Thankfully, none of the unhappy colleges are located in the saddest cities; that would be just too depressing.

* The #1 Stolen Car in America
A 1994 Honda Accord! The article says they are stolen for the parts, but how many of these 18-year-old cars are still out there? You have to wonder, are there more 1994 Honda Accords or copies of Action Comics #1 in the world?
Also at the top of the list is the 1991 Toyota Camry, which makes you wonder if the thieves are new car dealers trying to force people into buying vehicles built in this century.

* The Places You Must See Before You Die
Machu Picchu beats out such destinations as the Great Pyramid of Giza, Yellowstone National Park, Easter Island, Red Square in Moscow and the Great Barrier Reef. You could spend quite a bit of money just getting to those six places... or you could do a Google Images search.
==

Also in the news, there's the story about the 4,000-pound unexploded bomb that was discovered in the Rhine River in Koblenz, Germany. It is believed to have been dropped by the RAF during World War II and has been sitting there ever since. Half of the city's 45,000 residents -- including hospital patients and prison inmates -- are being evacuated before any attempts are made to defuse it.
If anyone is putting together a list of The World's Most Dangerous Cities, Koblenz should probably be on it.

Finally, Coca-Cola has announced that they are abandoning their special white holiday cans and switching (or "reverting back," as one article put it) to the traditional red ones. One of the complaints was that consumers were confusing the white cans with the silver Diet Coke ones. But there were also people complaining that the soda tastes different in the white cans!
Posted by Bob Rozakis at Thursday, December 01, 2011 2 comments: