I cleaned out a closet yesterday and came across an envelope of old photos that my grandfather had passed along to me. Among them was the one below, most likely taken in the summer of 1954. This next one is from about thirty years later. 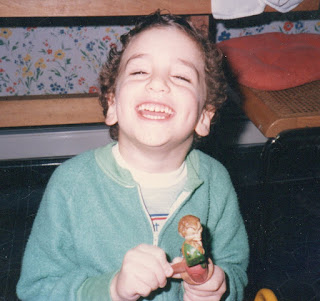 And compare those with this one, taken last month. What is it they say about apples not falling far from trees?
Posted by Bob Rozakis at Tuesday, January 19, 2016 No comments:

My pals Bob Greenberger and Paul Kupperberg have both blogged about watching the first episode of the Batman TV series fifty years ago today. (Check out their posts by clicking the links in the column to the right.)
As a heavy-duty comics fan, I too looked forward to the program. I had been reading Batman comics since 1959 and was a fan of both the Jack Schiff version with its aliens, gimmicky villains, and strange transformations as well as the more serious Julie Schwartz incarnation. The TV version was neither of these.
I recall the lunch table discussion with my comics-reading pals the next day in school. None of us could believe that they had turned Batman into such a farce. Of course, that did not stop us from watching it every week from then on. And complaining about the campiness.
We had hoped that the show would eventually become more like the comics. Unfortunately, the opposite happened. Comic books were overrun with giant sound effects that lasted until the Bat-bubble burst three years later. And the media got a tag to hang every story about comics on for the next half-century.
Given how popular the dark version of Batman in the movies (and comics) has become, it is hard to believe that the version from the TV series is still remembered so fondly. Maybe some energetic writer will find a way to tie them together. Can you imagine the Bruce Wayne in Gotham growing up to become the Adam West Caped Crusader? That would be something to see!

I've had a gym membership ever since I left DC Comics back in 1998. when I'm there, I do 45 minutes or so on the bike or the cross-trainer. I call the latter the "sweat machine" because I am usually drenched by the time I finish.
My visits are directly related to the weather; if it is warm enough outdoors for a bicycle ride -- 55 degrees or so -- I'll choose that over the gym. And I'll rarely go if volleyball is on the agenda on a given day. I used to go on my way home from work, but now that I'm retired, my schedule is far more flexible. In the past four days, for instance, I've gone at 5:30 p.m., 9:30 a.m., 11:00 a.m. and 2:30 p.m.  There are usually very few people in the gym when I go and almost all of them would fall into a category labelled "men of a certain age." Though I can't say for certain, I suspect that many of these gents are the same ones I encounter on the bicycle path when the weather is warmer.

One phenomenon I've seen over the years is the influx of new faces in the gym each January. Whether it is due to gift memberships or New Year's resolutions to lose some weight, the gym is most crowded in the first few weeks of the year. By the time February rolls around, they've lost interest.
Some years ago, I was peddling away on one of the bikes and another regular was on the one next to me. We were watching as a gent perhaps ten years our junior made his way from one machine to another, trying them out and making copious notes in a notebook. After the fourteenth machine, he jumped on a treadmill and ran for two minutes.
"Does this guy think he's going to lose ten pounds in one visit?"
"Probably," I replied. "He's a Janumember."
He contemplated the term for a moment, then nodded and said, "Yeah, exactly."

Posted by Bob Rozakis at Wednesday, January 06, 2016 No comments:

One of our family traditions for many years has been a special meal to celebrate the New Year. Each of us chooses two favorite foods and we have a buffet of diverse delights. In the early years, Laurie would cook almost everything, but we switched to ordering in after "the year of frying everything" (which included onion rings, potato latkes, chicken cutlets and other things I don't recall). Though we used to do it every year on New Year's Day, we've gotten more flexible in recent years. Case in point, our 2015/16 meal was a New Year's Eve lunch.

This year, Alex got to add his favorites -- he picked crab and ice cream -- to a menu that included fried chicken, sushi, pizza, palak paneer, pork lo mein, and a dessert platter. Nobody left the table hungry.

Alex spent New Year's Eve and New Year's Day with Papa, Grandma and Aunt Sammi, so that Chuck and Rebecca could attend a party and sleep in the next morning. As usual, the little dynamo kept the three of us busy. And since he is an early bird -- he was awake at 5:00 a.m. -- none of us was awake to see the ball drop at Times Square.