Among the events at the DC Comics company Olympics in 1985 was playing Family Feud. I came up with all the questions, then polled fans at a local comic book shop, as well as some of our regular letter column contributors to get the percentages.
The surveys included "Name your favorite hero with a color in his/her name" and "Name someone in the comics industry with the initials J.S." I played the host, but, unlike Richard Dawson, I was not kissing or hugging any of the contestants.

Okay, so I've been retired for almost four weeks and what have I done with all my "free" time?

* Well, there's the twelve hours spread over four different days that I spent at Combined Resources, wrapping up a couple of audits and other end-of-quarter business.
* I visited DC Comics twice, once for the retirement luncheon for six of my former compatriots and the other for the "getting out of town" last day ceremony.
* I had three doctor appointments -- two six-month check-ups and my annual physical. (Hey, isn't this what old people are supposed to be doing all the time?)
* I ran and played Adult Ed volleyball on seven evenings.
* I donated platelets twice.
* We had Alex here for a weekend.
* I got the annual inspections done on the cars.
* I replaced a bunch of rotted pickets in the fence in our back yard.
* We met friends at the Museum of the Moving Image to see the "Mad Men" exhibit.

Yes, I'm aware that pretty much everything on the list above would have been done even if I was still working, though probably at different times or on different days.

On the other hand, something that would not have happened was the establishment of Men Seeking Pizza. Two friends and I have decided to find the best slice of pizza in town, so we meet each Wednesday and venture to one of the many pizzerias in Farmingdale. After dining, we return to my house to evaluate the fare. With swimming season approaching (albeit at a snail's pace this year), our post-pizza time may well be spent poolside. We already have four potential additional members and a virtually unlimited number of pizza places in the area, so MSP looks to be something I'll be committed to for awhile.

One other accomplishment of my retirement: I have finally caught up in reading the perpetual pile of magazines in the family room, something that has not happened in many years. For the first time in memory, the only periodical in sight is the weekly TV section from the Daily News.
Posted by Bob Rozakis at Sunday, April 26, 2015 3 comments:

During the company retreat at Great Gorge, DC staff members also ventured outside. A number of them attempted snowboarding down a hill behind the resort. Those who chose to do it solo were far more successful than those who tried a two-person ride.

Back to the "Game Night" photos from the 1985 DC Comics retreat at Great Gorge, NJ.  Unfortunately, since the players were seated around tables, we have a lot of backs and tops of heads, only some of which I can identify.

As part of his current weekend visit and with full approval of Mommy and Daddy, we took Alex to get his first haircut. The snipping was done by Alex the Barber, who has been cutting my hair for a lot of years and took over the shop from Vito, who had given Chuck his first and many subsequent haircuts.
Poppa got his hair cut first and then Alex took a seat in my lap. While not his usual chirpy, talkative self, Alex sat still for the entire haircut and allowed Alex the Barber to do his work. Grandma dutifully recorded the event with her iPad and even collected some of the locks of hair for posterity.
When it was all done, Alex got a lollipop -- there are some barbershop traditions that never change -- and then went for lunch at McDonalds.

DC Comics Has Left the Building

When DC Comics made its move from 1325 Avenue of the Americas to 1700 Broadway in the early '90s, I made the comment that, as we had been moving steadily westward across Manhattan since I started (at 909 Third Avenue in 1973), the next move might land us in the Hudson River. They have managed to jump the river -- and the entire continent -- with their departure for offices in Los Angeles.
Until a few months ago, I would not have expected to be there when the company finally departed the current space. I had not visited the offices since late 1999 or very early 2000 but was invited back for the final Manufacturing Department Holiday Party by Alison Gill (You can read about that here.) I made a couple more trips since to have lunch with Alison and Terri Cunningham and last week was invited to the farewell luncheon for six members of the manufacturing department, with all of whom I had worked for many years.
Yesterday, I was invited to join current staff and a small contingent of former long-timers for a closing day toast and party. For me, it was an opportunity to see a few more people I hadn't seen in a number of years. For many of the current staffers, both those who are moving with the company to the west coast and those who are ending their DC careers here, the party atmosphere may have been camouflaging a feeling that "we may never see one another again." It was something I experienced a decade and a half ago but, after yesterday (and those previous visits), I can only say, "You never know."

Thirty and One (Hart, Heart) Jokes

My favorite teacher in high school was Janet Hart, who taught 11th grade English. She was instrumental in the change of Hobart Pumpernickel from a purveyor of amusing tests to the author of dozens and dozens of stories about what went on in "Clemont High School." (You can find a bit more of the back history here.)
Janet was also the adviser to The Muse, the school's literary magazine, the staff of which I joined early in my senior high career. In those days long before computers, the magazine was prepared as a set of camera-ready typewritten pages, with art cut and pasted into place. I became the Production Manager, possibly because I was the fastest four-fingered typist on the staff. (Turned out to be not the only time I was a Production Manager, though the next time required a lot more skills than fast typing.)
In the Hobart stories, she became Planet Smart, a sometimes beleaguered teacher but, more importantly, the worst driver in the world. This reputation arose in two ways: When Muse staff meetings ran late, she would drive us home. On one of those occasions, possibly because my compatriots lacked any sense of direction but more likely because they liked to goof on her, she dropped off Ricky and then we went in a very large circle, dropping off Gerry on the way, to drop off Alan, who lived right next door to Ricky!
The other contributing factor to Miss Smart's reputation came from the times that she would pick me up and give me a ride to school. Our cul-de-sac neighborhood fell just inside the one-mile radius that determined who walked and who got bused; we used to joke that one kid actually qualified, but only if he slept in his back yard. My route was a long stretch down Elmont Road, one of the main thoroughfares of the town. One morning, I heard a horn honk as a car pulled up right next to me; it was Janet and she offered me a ride. Of course, Hobart's version of the story was that she had been trying to run me down and, when I jumped out of the way, she needed an explanation for her actions.
(This actually solved a mystery that had perplexed  me the previous year. Lisa, who lived across the street from me, was two years ahead of me in school. We did not walk to school together but there were many mornings when we'd be en route at the same time, one a block or so behind the other. On more than one occasion when Lisa was in front of me, I would look up and she was gone. Turned out she was one of the Muse editors that year and Janet would pick her up!)

Anyway... (This has become one of my more rambling blog entries!) In the summer of 1968, my pals Alan Ginsberg and Steve Machtinger and I started making up a number of really bad Hart / Heart puns. Channeling our creativity, we put together a booklet, complete with illustrations, and sent it to Janet. I recently came across a copy of that booklet, which I have scanned, with, alas, some bleed-through from the other side. A few samples appear below but, be warned, some of these jokes really are groaners. 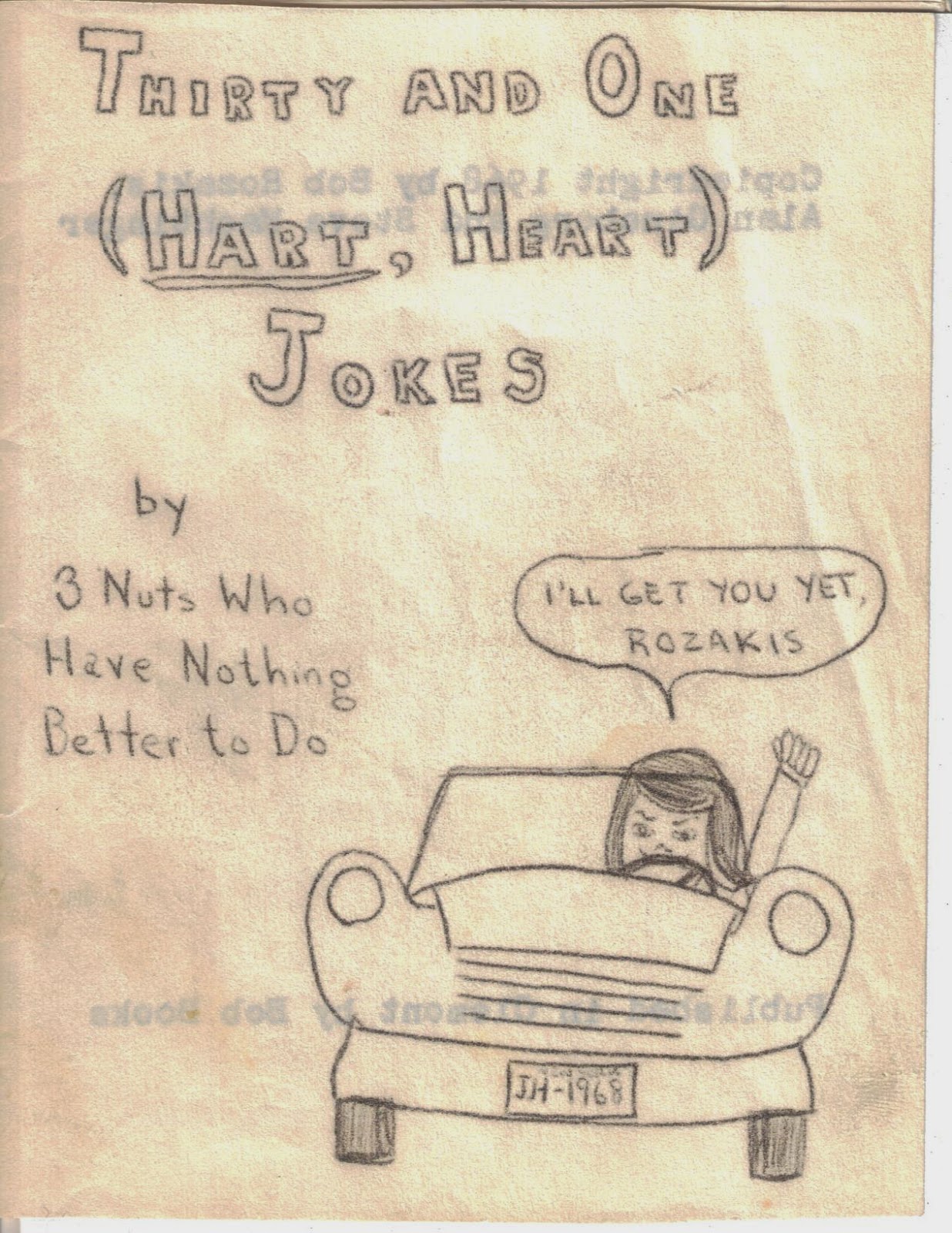 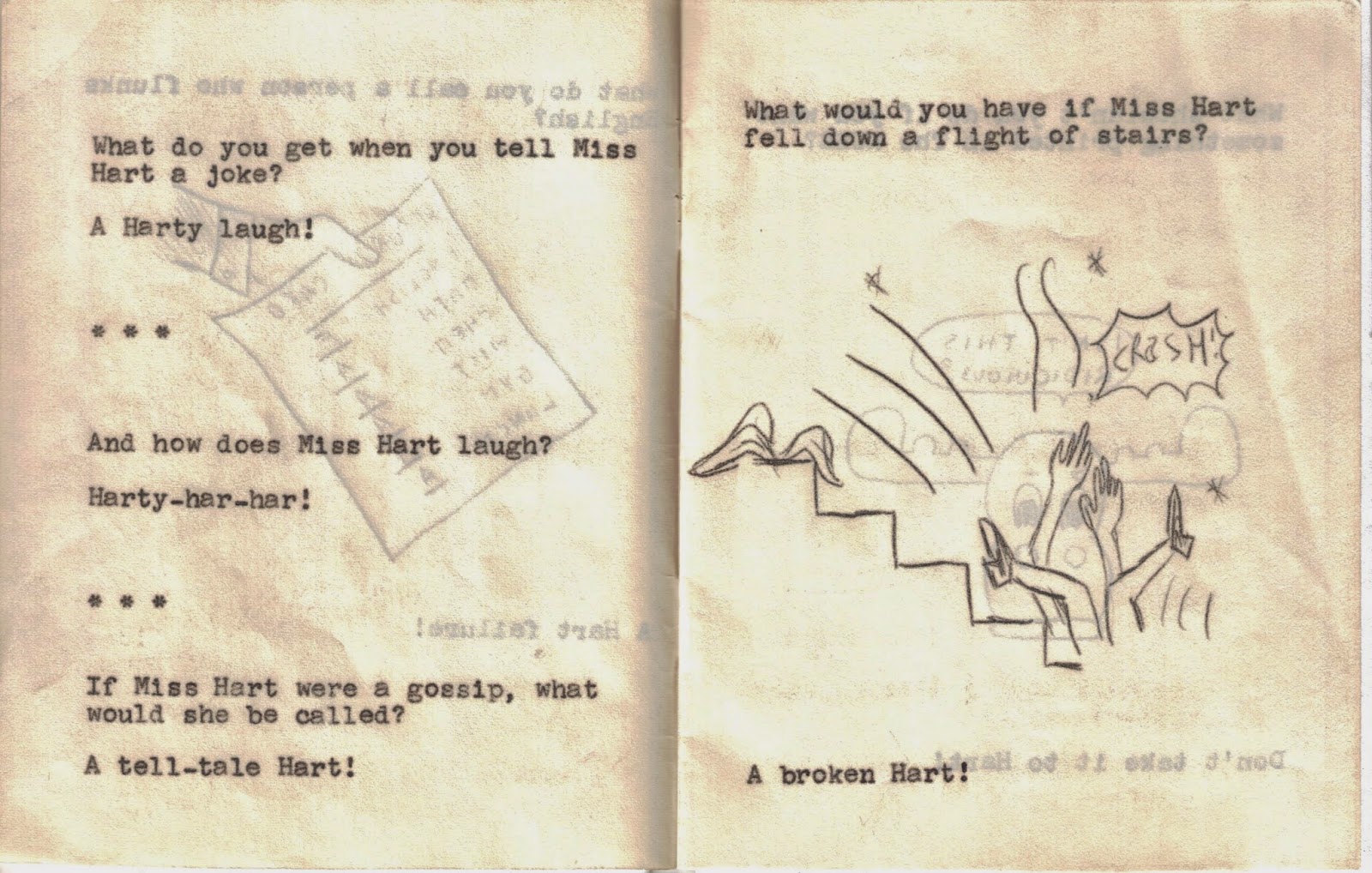 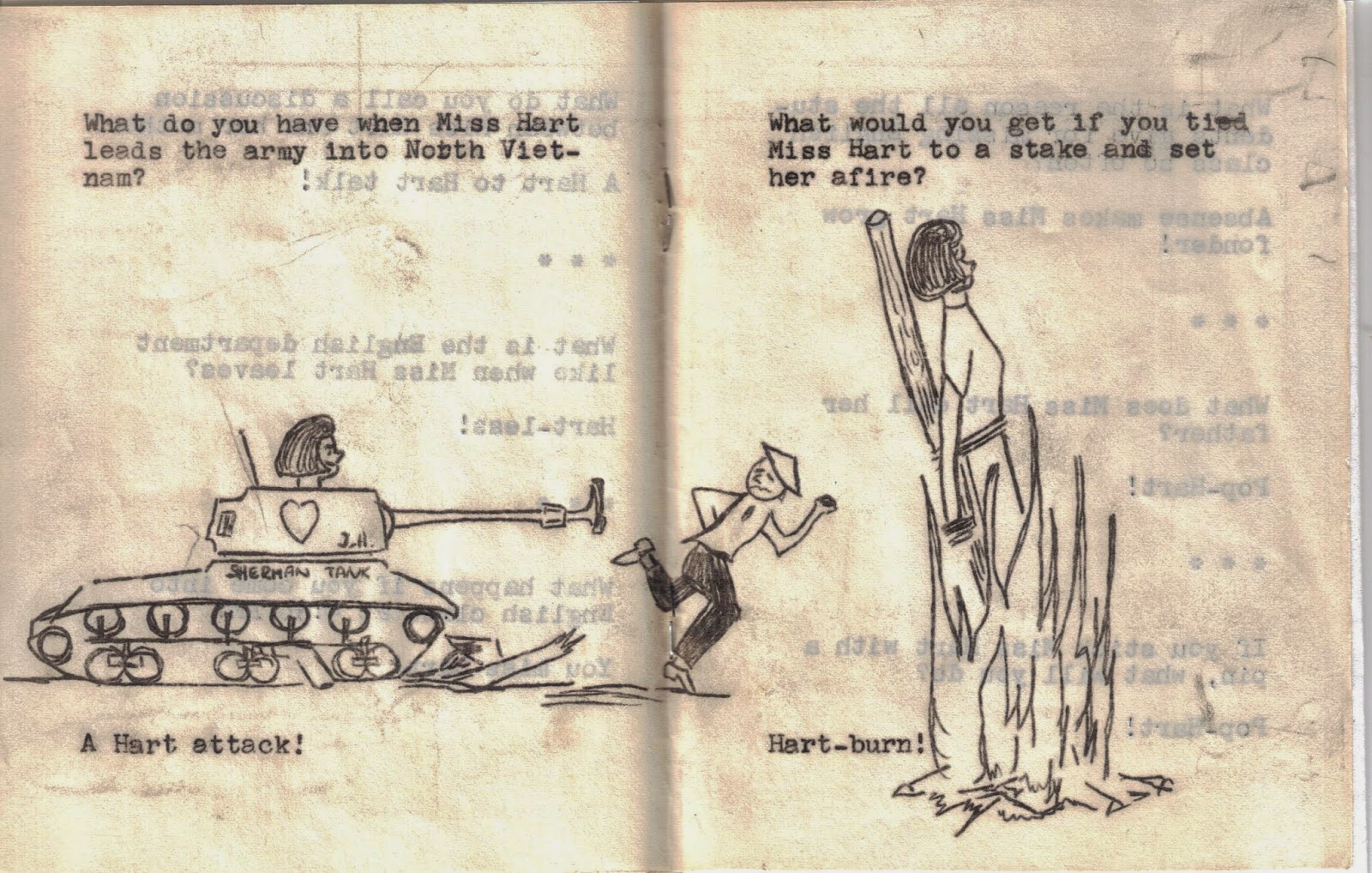 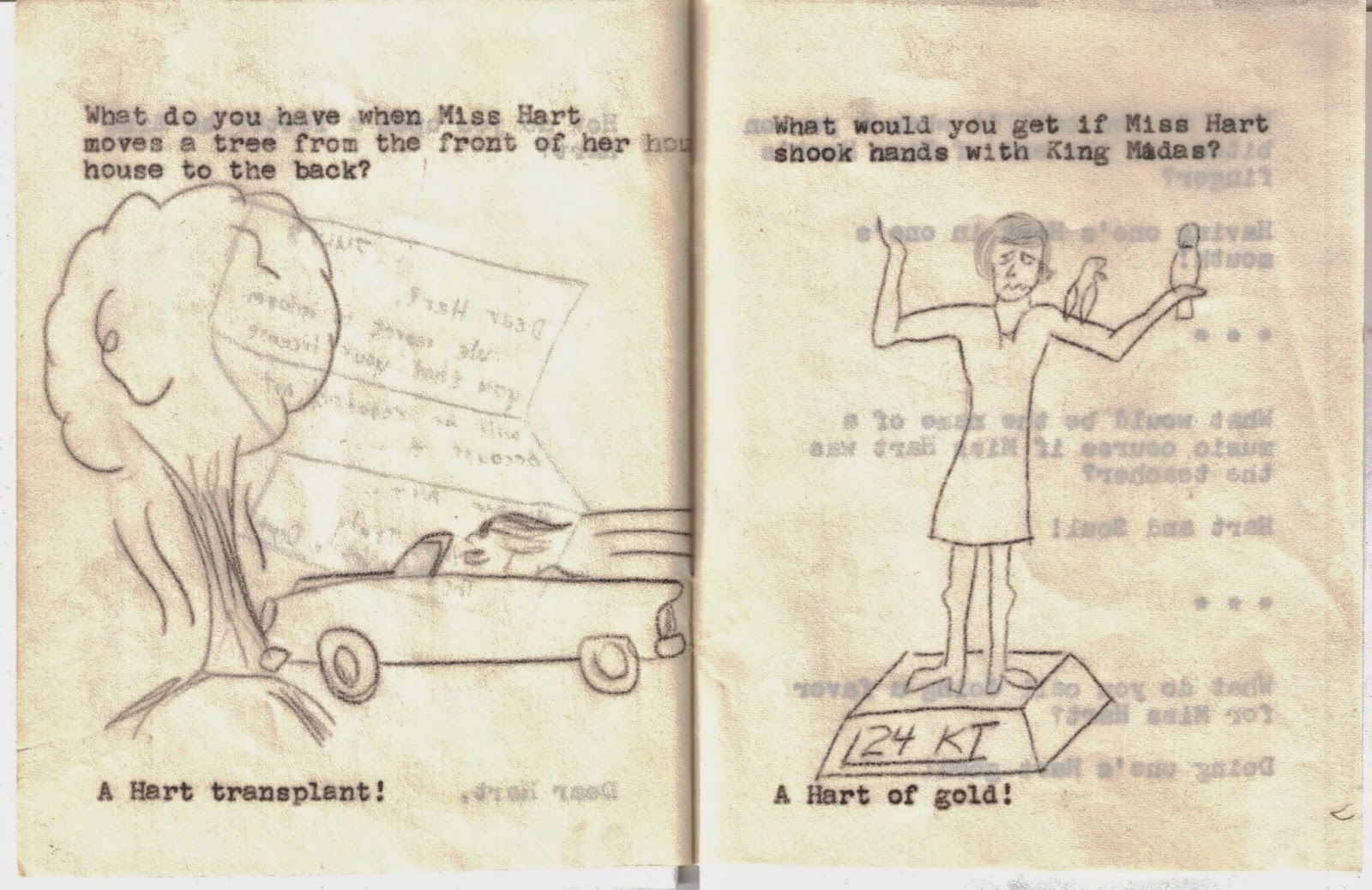 Old Photos of the Week #12: The DC Bullets

In recognition of baseball's Opening Day. here are a couple of photos of the DC Bullets softball team... 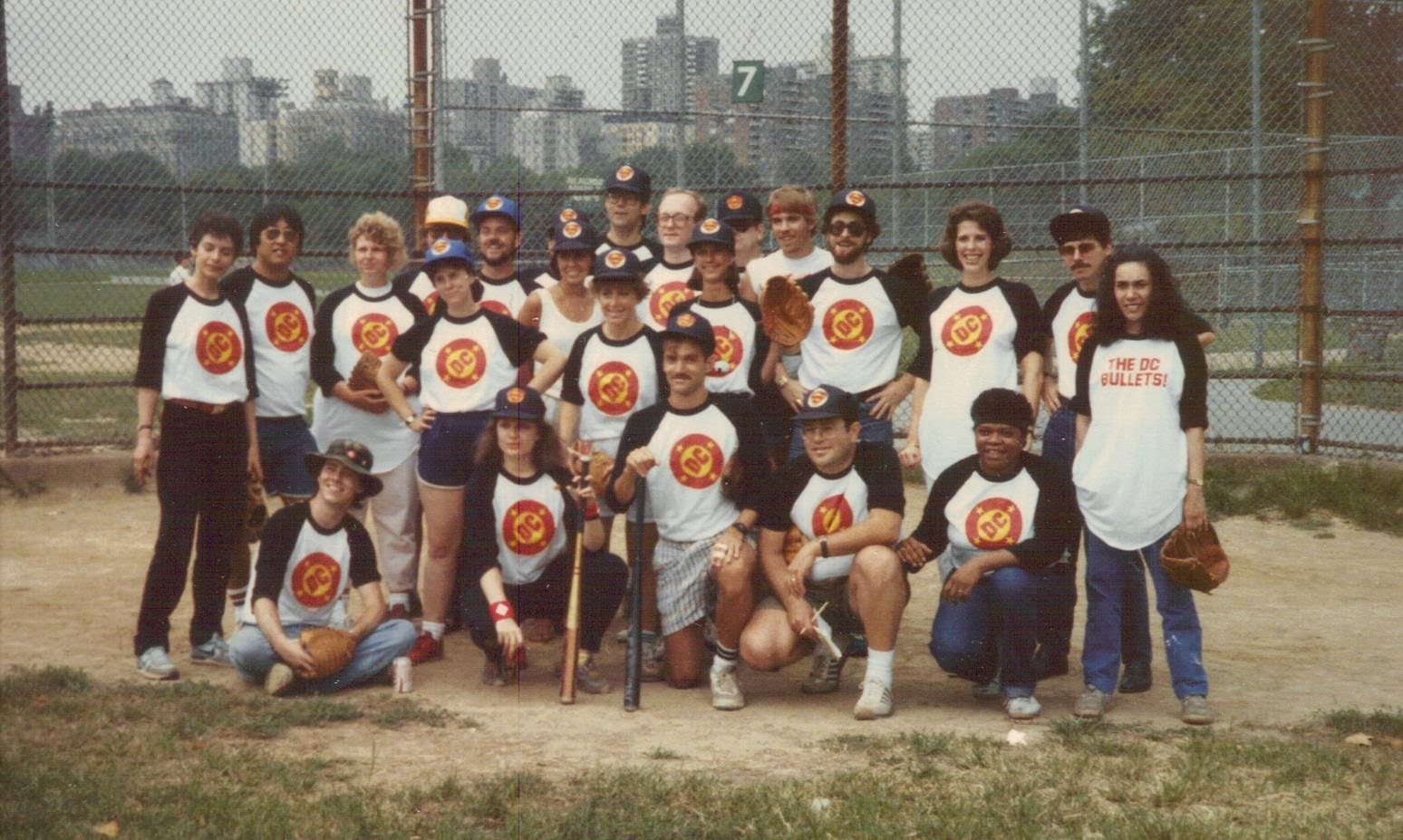 In the late 1970s, the Bullets played only one game per season, against Marvel's team. We won the first two years and lost the third time.

Despite the two victories, we often looked like the Bad News Bears grown up on the field. During the second game against Marvel, the Bullets hit into a triple play, prompting yours truly to quote Casey Stengel and ask, "Can't anybody here play this game?"
After a couple of years of dormancy, the team returned to the field with a much-expanded schedule. We played against teams from other publishers, banks and other financial companies, along with Marvel and our sister company, Warner Publishing.
During this period, DC was expanding and adding many more staff members, some of whom could actually hit and throw. We made a respectable showing over the course of many seasons.
The Bullets continued to play through last year; whether they will field a team in LA is yet to be seen.