Button Gwinnett, born in England in 1735, became a merchant and emigrated to America in 1762. By 1765, he had given up his mercantile pursuits and owned a plantation in Georgia. He was elected to the Provincial Assembly in 1769 and became a strong advocate of colonial rights. He served as the second governor of Georgia for a brief period.
Gwinnett was a signer of the Declaration of Independence and, of all those men who signed it, his signature is the rarest and most valuable. It is perhaps because Gwinnett died of wounds received in a duel in 1777 that there are not many examples of his signature to be found.

Why am I telling you about a man with an odd name whose only claim to fame is being one of the 56 men who signed the Declaration? Because I happened upon the fact about the value of his signature and used it in a story many years ago.
And while I've occasionally brought it up as a "fun fact" over the years, I don't think I've ever seen anything about him in print.

But now I've just finished reading The Burglar Who Counted the Spoons, a new entry in the series about bookshop owner and gentleman burglar Bernie Rhodenbarr by Lawrence Block. It was an enjoyable read, as all the books in the series are, even if I did figure out ahead of time that Mr. Gwinnett's role in the past would play a part in the story.

It's just as I tell my writing students every summer: An interesting fact you come across can lead to an entertaining work of fiction. And here's a case where it happened more than once.
Posted by Bob Rozakis at Monday, August 31, 2015 4 comments:

Alex (and Chuck and Rebecca) came for a visit yesterday and the little man was excited from the moment he got off the train. Actually, I'm sure he was excited long before that, as he usually is whenever he is coming to see Papa and Grandma.

As soon as he came in the house, he announced that he wanted to play with the large wooden train set that Laurie has borrowed from friends. It took only a few minutes for a massive network of tracks to take over the family room floor, set up almost entirely by Alex, with only minimal assistance from Papa to connect up a couple of routes to nowhere.

In addition to keeping the trains on schedule, Alex took time to review the toys in the wall unit, those that are still in the basement, and the ones in the dresser that Grandma has just refinished and painted that will soon be making its way to his bedroom at home.

After a nap with Papa on the "big boy bed" -- we have now outgrown the porta-crib -- it was off to Jones Beach with Mommy and Daddy, where he enjoyed the sand and the waves. "We have to hold hands in the water," he told me later, "so the waves don't make me fall down."

We decided the easiest way to clean him off after the beach was to dunk him in his wading pool, but he decided he wanted the big pool with Papa. 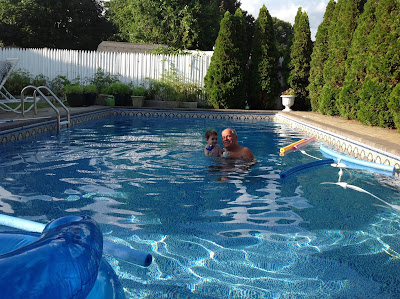 There were more adventures with the trains -- interrupted only by dinner -- as well as using some of his construction trucks to make a cake. (Obviously, it was to be a massive cake since the ingredients were being carried by the bulldozer and being mixed in the dump truck.)

There was also time for a photo op of Alex and Papa in our matching fedoras. It is only a matter of time before he and I are singing a duet of "New York, New York" in our best Frank Sinatra voices. 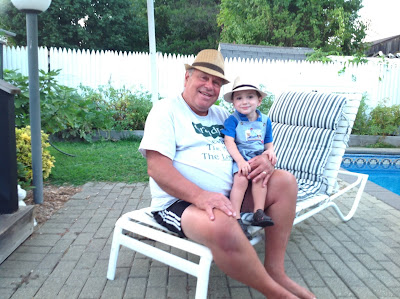 An article in USA Today this morning talks about Baby Boomers saddled with debt, but it is another example of "fun with numbers," that is, using the numbers to prove whatever point they're trying to make. (In this particular case, it is a very long lead-in to what people with large debt should do to get out from under.)

Okay, so let's flip this on its head: Sixty-six percent of the Boomers have less than $19,000 in debt. Not an insignificant amount, but certainly not an indication of a generation drowning in red ink.

And let's take some of the rest of the chart apart:
Forty-seven percent of the Boomers have mortgages with a median debt of $90,000. Some portion of the third of the generation with $37,500 in debt must have mortgages. Unless your house is under water -- worth less than what you owe -- you could sell it and pay off the balance due. Debt erased.
Thirty-five percent have car loans with a median of $14,000. I bought a new car in 2013 and financed part of it  at 0% because the dealer knocked a chunk off the price if I did. So I am one of many who had an auto loan and I am sure I wasn't alone in doing this. Real debt or artificially created?

The article then goes on with the usual advice for the 33% of Boomers who are saddled with the large amount of debt., including "increase your income" and "pay off high-interest debt first."

Yes, I'm sure those would be a good start, but let's go right to the core: "Spend less than you earn!" If you had practiced this all along, you would probably be where the other 66% of the Boomers are.
Posted by Bob Rozakis at Wednesday, August 19, 2015 No comments:

The number one question I'm asked these days involves my being retired. Doesn't matter whether the person asking is retired as well, nearing retirement, or decades away from it, the inquiry centers on my departure from the work-a-day world.

Though I retired on March 31st, the first couple of months felt more like a long vacation than the end of having to go to work. By the time I'd wrapped up some audits and other odds and ends that carried over at the office, April was pretty much gone. I spent a lot of time in May working in the back yard, the major project being the removal and resetting of about half the pavers of the patio. Playing volleyball at the beach, doing voluntary Notary Public duties at the library, and establishing the weekly Men Seeking Pizza lunch group gave the weeks structure. And, before I knew it, it was the end of June and time to go teach at CTY.

Now that my summer teaching stint is over, I'm in full onset retirement mode. (As the session ended, my various colleagues at CTY were boasting or bemoaning that they had one week or two or three before they had to go back to work. After many years of saying, "I go back to work on Monday," I was able, this year, to say, "I go back in 46 weeks." which is when CTY starts in 2016.)

There's still volleyball, notarizing, and pizza lunches, along with various regular and not-so-often chores around the house. There's a list of indoor things I intend to do once the weather turns cooler, but right now I'm taking advantage of the sunshine and the pool and getting lots of reading done. I can stay up and watch west coast baseball games or an extra episode of whatever DVD set I'm binging on -- it's currently Season 3 of The X-Files -- without having to worry about getting up early. And, unless I've got an appointment for a platelet donation, there's no need to set the alarm clock.

CTY 2015 is done and all the staff members and students are back in the real world. As always, the six weeks seemed incredibly long yet passed remarkably quickly. Among the things that happened this time around...

* My long-time "camp pal" Scott Dodd, who has been our Academic Dean for a decade, wrapped up his final CTY summer. He's heading for a full-year position in his home school district which will preclude his return to Chestertown. We had a very nice retirement dinner for him, along with some fun roasting of the guest of honor.

* Despite some periods of pre-teen angst, my second session students were able to do a second-best-record 86 assignments. These included a wide varieties of poems, fiction exercises, news stories, advertisements, and even tales of a haunted painting in the classroom upstairs.

* During an activity period, a superhero trivia quiz I had intended to run turned into a one-student oration of his personal reviews of every comic book-inspired movie and TV show from the past thirty years. Then he proceeded to tell me what he expects to happen in all the upcoming movies and TV shows, after which the period was (thankfully) over and he had to go back to his dorm.

* The volleyball court we'd been playing on for the past two years got paved over to make way for a new dorm building. Our replacement, a backyard setup of poles and net, just wasn't the same, so our VB playing was seriously curtailed.

* Among the words of wisdom uttered in the classroom:
+ "Do you like cheese on your cheeseburger?"
+ "What other types of persuasive writing are there?" "Verbal?"
+ "Hey, where did my pants go?"
+ "Why are you biting your notebook?"
+ "Algae has to pee too."
+ "Girls are more scientifically prone to lying."
Posted by Bob Rozakis at Monday, August 10, 2015 No comments: