For the first time in awhile, I joined Howard Margolin on his radio program, "Destinies - The Voice of Science Fiction" for the annual year-end review of the best, worst, and most disappointing books and events in comics. While there isn't much in the way of new comics being published that I am reading, I was able to hold my own and talk about The Walking Dead, new material coming from Charlton Neo,  and the various collections of vintage comic books and comic strips that are being published, You can listen to the broadcast here by scrolling down to the December 26, 2014 entry.

Howard has been doing his weekly radio for for nigh on forever -- I've been a guest nineteen times over the years -- and he gave me a recording on a 1997 broadcast that featured an interview he had done with me way back in 1991. Much of that interview involved my efforts as Production Director at DC Comics, particularly relating to the various types of paper we were experimenting with and using on the books at the time. (You can find that program here by scrolling down to the March 7, 1997 broadcast. And yes, that is a very young Laurie and me in front of the DC Comicmobile in the accompanying photograph.)
Towards the end of the interview, Howard asked me what I had in the works as a writer and I talked about a project called Dinosaur Island. I invite you to listen as I talked about a few of the elements that were part of my proposal -- which was ultimately rejected by DC because "there's no market for a dinosaur book (in 1991)" -- and remind you that Jurassic Park came out in 1993.
Posted by Bob Rozakis at Monday, December 29, 2014 No comments:

By the time Agatha Christie passed away in 1976, I had read pretty much everything she had written. I enjoyed all the Hercule Poirot books and the Miss Marple mysteries and had a special fondness for Tommy and Tuppence. With no new books available, I moved on to other authors, expecting that I would someday reread some of the Christie classics.
Though that time for rereading hasn't yet arrived, I was quite pleasantly surprised to see a new Poirot mystery, The Monogram Murders, written by Sophie Hannah, had been published. 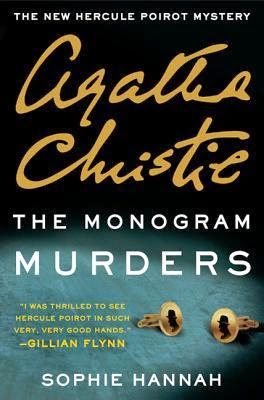 Set in the late 1920s, the novel fits nicely among those by Ms. Christie, and presents Hercule Poirot in all his glory. Ms. Hannah has created a new character, Detective Catchpool, as the narrator, giving her the opportunity to explore Poirot's eccentricities through a fresh set of eyes. Catchpool experiences the same frustrations of Christie's own Colonel Hastings and others as Poirot teases the answers to him (and the reader).
As for the mystery itself, three bodies are found in a posh London hotel, each carefully posed with a monogrammed cuff link in his or her mouth. Catchpool, the detective in charge of the case, recruits Poirot to help him make sense of the case. As with the best Christie books, not everything is what it seems, though the answers are right there in front of you if you (like Poirot) know what to look for.
All in all, a quite satisfying read. I hope Ms. Hannah gets the opportunity to continue the series.
Posted by Bob Rozakis at Monday, December 15, 2014 1 comment:

It has been almost fifteen years since I was last in the DC Comics offices at 1700 Broadway. Back then, the company spanned five floors, but over the years that has been whittled down to three. Come April, it will be none, as the company moves its operations out to California.
As this will be their last holiday season in New York, Manufacturing VP Alison Gill decided invite some "alumni" to her department's annual party. That list of folks included yours truly and since there are still a few people there who I know from the old days, I decided to accept the invitation.

I arrived a bit early and Alison graciously guided me through all three floors. Turned out there were more than a few people that I knew and I was greeted numerous times with smiles of delight and surprise. The most-often-made comments were along the lines of "I remember you with glasses and/or a mustache and/or hair!"
Virtually all the production work done on comics is electronic these days, so the folks in my former department sit at desks with computers rather than at art tables. In fact, there was not a page of original art in sight anywhere I went.
Gone as well was the stat room, which was a mainstay back when we had to rearrange art manually. And the film library -- all the negatives used to make printing plates for the comics dating back to the 1950s -- had long ago been shipped to a facility were it is midway through a five-year project of digitizing everything.

When we completed my tour, Alison and I sat and chatted for a few minutes and then headed over to a nearby pub for the party. I spent some time chatting with more familiar folks there, but then said my goodbyes in order to meet Chuck and Rebecca at Penn Station.
And there, just in case I hadn't had enough reminders of the twenty-five years I'd worked at DC, the Long Island Railroad was delaying and cancelling trains due to police activity. As it had on a number of past occasions, the commute home, which should have taken an hour, took two and a half.