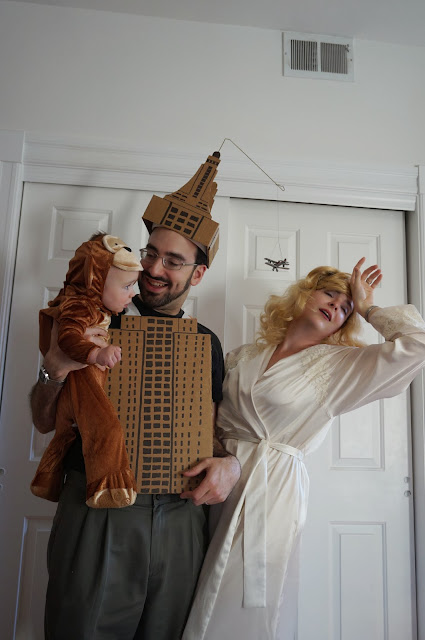 King Kong scales the Empire State Building as Fay Wray swoons. But is the Eighth Wonder of the World trying to figure out how he's going to swat that pesky bi-plane or how Mommy turned into a blonde?
Posted by Bob Rozakis at Thursday, October 31, 2013 No comments:

Those of you who follow my maniacal desire to get maximum use out of the pool know that Columbus Day is the unofficial last day of the season. On Monday, with the water at about 65 degrees according to the Temperature Team, I went in, but only up to my knees. (I have been known to go for an actual swim with the water that cool, but that's only when the air temperature is higher than the water temp, which was not the case.)

So now the cover is in place and all the components are packed away. Oh, I'll still get a few more afternoons of sitting poolside if the weather is nice, but it's not the same when you can't see the water.

We've scheduled the reopening for April 15, 2014, so it is only six months to the next First Dunk! Or about a week and a half, the way time seems to fly by.
Posted by Bob Rozakis at Wednesday, October 16, 2013 No comments:

The new president of the Tenants' Association at 438 Washington Street calls the meeting to order. When it is time to discuss new business, he tells the members, "As you know, we have allowed tenants to occupy the two apartments in the basement, though the plumbing layout has them sharing a single bathroom. I propose that we hire a company to renovate the piping down there and allow each tenant to have a separate bathroom."

One of the building's tenants, Richie, objects. He says that the plan is impractical, far too expensive and will never work properly. He also says that the Association should vote to cut back on the existing plumbing system because it is becoming more and more expensive to maintain. The president and many of the members are puzzled by Richie's reaction, but nod and smile politely.

The members vote on the proposal and pass it by a substantial margin. The president calls Don the Plumber, who listens and comes up with a plan. "But," Don cautions, "it is not going to be a simple job and I may run into glitches -- meaning additional expenses -- as we install it."

"That's okay," the president assures him, because providing adequate plumbing to the basement tenants is an absolute necessity.

At the next meeting, the president presents Don's plan for the renovations, including the costs and how it will be paid for. Richie objects; he announces that he is determined to stop the work. He demands another vote, which, in order to mollify Richie, the president allows. Once again the proposal is approved.

Richie demands that a select committee be formed to review the plans and present its findings at the next meeting. Because he is so vociferous, enough of the members vote in favor of forming the committee. Not surprisingly, Richie demands he be appointed to it.

At the next meeting, the committee presents their findings: The plan is sound, the funding is practical, and the work should begin. Their vote was not unanimous; there was, to no one's surprise, a dissenting vote cast by Richie.

Richie now demands that the entire association vote on the issue again. Realizing that arguing against another re-vote will simply be a waste of time, the president again puts the issue on the floor. For the third time, it passes.

Don and his crew arrive the next morning, ready to begin the work. They are confronted by Richie, placard reading "Stop the Project Now!" in hand, blocking their path. The president and several of the tenants try to move Richie, but he refuses to give way. Reluctantly, the president calls the police.

When the officer arrives, he explains to Richie that, while he is free to express his opinion, he cannot prevent Don from working. Richie objects and claims that there is no permit for the work and that Don's license is a fake. Presented with these claims, the police officer has no choice but to investigate their veracity.

The work is delayed as Don has to get a letter from the County Clerk affirming his license as well as have the Department of Public Works verify that they have reviewed and approved the plans.

While Don is doing this, Richie goes to some of the neighbors, telling them that the plumbing plan is wrong, that it will hurt property values, and will ultimately destroy the entire plumbing system of the building. Several of these neighbors go to the president demanding an explanation; he calmly explains the plan and points out where Richie is blatantly lying. Since none of them disagree about each tenant having a separate bathroom, they decide there is, in fact, nothing to be concerned about.

Finally, Don is about to start the work. He and his crew arrive, mildly surprised that Richie is not in front of the building again trying to block the way. The president is relieved that Richie appears to have given up.

Don and his crew have just started to work when all the electricity in the basement is turned off. He comes upstairs to report the outage to the president and discovers many of the neighbors in the hallway, all complaining that their power is also out.

A quick check determines that the outage is the result of something outside the building. Tenants make their way out to the street. Down the block they spot Richie, sitting at the top of a utility pole, waving. "I've cut off the power," he yells, "and I'm not turning it on again until you give up your plan to put in those bathrooms!"

When a tenant complains that, in addition to cutting off power for Don and his crew, Richie has also cut it to their apartments, he points at the president and says, "It's all his fault."

"We all voted in favor of doing this work," shouts another tenant.

"Not all of us. Those bathrooms will bring ruin to the whole building!" Richie replies.

"I'll leave this to you," says Don to the president. "We've got battery-powered lanterns and tools, so we can go to work anyway." He and his crew return to the basement.

"How long do you think he'll stay up there?" one of the tenants asks the president.

"Who knows? A couple of hours? A day? At this point, he's ticking off the rest of the tenants. Probably only a matter of time before one of them comes up with a way to get him down..."

I met former astronaut Scott Carpenter when we were both guests at an I-Con at SUNY Stony Brook back in the late 1980s. (Unlike other comic conventions, I-Con had a "hard science" component and the guest list included noted scientists, professors, and explorers.) We were sitting in the guest lounge shortly before we each had to head off to sit on panels.

I mentioned to Carpenter that he and I had a connection that dated back to his days in the space program. My Uncle Jimmy was a NASA engineer, working at Langley Air Force Base in Virginia back when the Mercury astronauts were also stationed there. My cousin Peter went to school with the sons of Carpenter, Wally Schirra and Gus Grissom. To my surprise, he remembered Uncle Jimmy -- "He was that little bald guy!"

We chatted about his post-NASA days and his interest in sea exploration. We also noted the coincidence of I-Con being at Stony Brook, as that was also the name of the housing development the astronauts and NASA staff lived in in Newport News.

With the time of our respective panels approaching, I said that I wanted to use the men's room before going on my way. I told Carpenter about Schwartz's Law, named for DC Editor Julie Schwartz: "Don't go anywhere without going first."

Carpenter replied with his own version, courtesy of President Lyndon Johnson. "After I made my space flight, I was in a ticker-tape parade, riding in the car with then-Vice President Johnson. He told me, 'Now that you're famous, there are two things you should never pass up: Free lunch and a chance to go to the bathroom!'" And thus was born Lyndon Johnson's Corollary to Schwartz's Law.

Our paths did not cross again at the convention, but I was glad to have had the chance to speak with him. When I next spoke to Uncle Jimmy, I mentioned that Carpenter remembered him. My uncle's response? "He called me 'that little bald guy'?!"
Posted by Bob Rozakis at Friday, October 11, 2013 No comments:

This Month in Alex's World 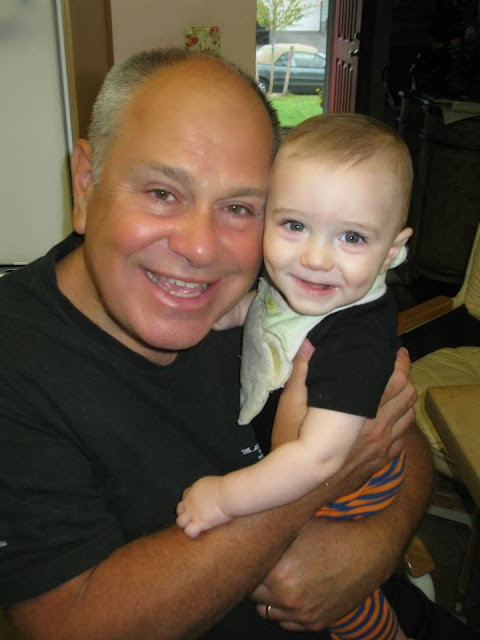 Alex had his first sleepover at Grandma and Grandpa's as Chuck and Rebecca celebrated their seventh wedding anniversary with a one-night weekend away. He had great fun exploring the house and playing with Grandma's stash of toys. He even got to spend time with Aunt Sammi, who was in town for a visit.
He (and we) had a wonderful time and look forward to the next visit.
Posted by Bob Rozakis at Monday, October 07, 2013 No comments: