We spent Christmas morning having brunch at Chuck and Rebecca's and Alex was thrilled to have both sets of grandparents on hand, along with Aunt Sammi. He entertained us with songs (including having everyone do the hokey-pokey), made us Play-Doh delicacies, and helped us open our gifts.

He was also thrilled when Santa made a special stop to drop off one more gift for him, this year's Hess truck. 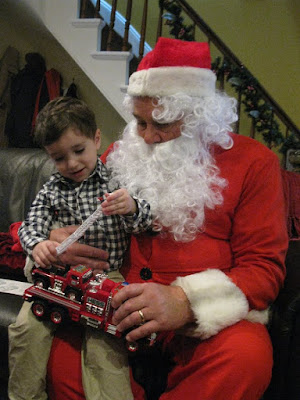 It started when our friend Stephan declared that the Costco in Commack had the best pizza around. (He later claimed he meant of all the Costco warehouses at which he'd had pizza, but that is neither here nor there.) With more than a dozen pizzerias in Farmingdale alone -- and plenty more within a short drive -- I said that we could find a better slice. And so, Men Seeking Pizza was born.
Every Wednesday our "Core Four" -- Stephan, Ed, Ken and your truly -- along with occasional guests, visit a local pizzeria, have a couple of slices, and rate them on a scale of 1 to 10. Most of the places we visited over the past nine months have served up a good pie, with only a couple of clunkers.
I've been keeping a running tally and, over the past three weeks, we've been having our year-end playoffs. Two weeks ago, #4-ranked Marino's went up against #1-ranked Mary's, with the latter posting a 4-1 victory. Last week it was #3 Piazzetta beating #2 Frankie's with a 4-0 score.
This set the stage for today's final and, despite our expectations of a closer battle, Mary's romped with a 4-0 score and has been declared "Best Pizza in Farmingdale - 2015!"

What does this mean for the pizza business in Farmingdale? Probably nothing, except that if someone asks, I now can state assuredly which one has the best pizza.

Stephan, by the way, still insists that he likes the Costco pie the best.
Posted by Bob Rozakis at Wednesday, December 16, 2015 2 comments:

A Thank You Note

I got the following email this morning...

I’m sure you don’t remember, but you dutifully met with me in 1985 to reviewed my portfolio, such as it was for a seventeen year old. You were candid and encouraging. This meant a lot to me and only more as the years have passed. I ended up attending SVA and eventually became Joe Orlando’s teaching assistant. After school I began penciling for DC, Marvel and the others through the 90’s. Now I run a graphic design practice.

Thank you for setting a realistic tone to my career as a commercial artist, it has never been forgotten.

To be honest, I don't recall this particular meeting, as I reviewed the portfolios of a number of hopeful young artists during my years at DC. But it was great to hear from Alex and to learn that I'd played a small part in his successful career.
Posted by Bob Rozakis at Thursday, December 10, 2015 No comments: 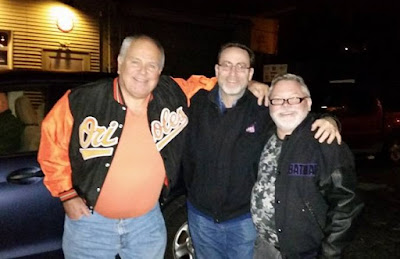 Twenty years ago, Rick Taylor, Bob Greenberger and I saw one another every day at work at DC Comics. A few years later, we were all on to other things. In fact, the last time we were together was my son Chuck's wedding in 2006... until this past Saturday night when we, along with our spouses, met up for dinner in Philadelphia.
Philly is a midpoint for the Greenbergers and Rozakises, coming from Baltimore and Long Island respectively, and we have met there a few times before. Attempts to catch up with Rick did not work out then, but this time we were able to get all the schedules to mesh and we had dinner at The Angry Moose, a very pleasant place a few blocks from Rick's home.
After dinner, we turned the photo op into an idea for a movie remake. Hey, if they can redo Ghostbusters with a female cast, why can't Charlie's Angels be three old guys? Maybe we can get Jaclyn Smith or Kate Jackson to play Bosley? 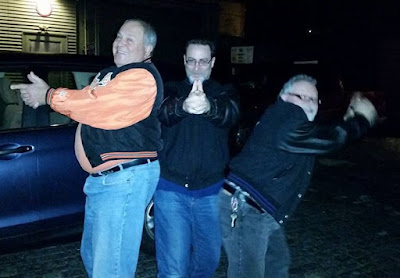 Posted by Bob Rozakis at Tuesday, December 08, 2015 No comments: