As has been the tradition for many years, we hosted Thanksgiving dinner.
Also as usual, Laurie spent much of the previous week prepping, cooking and baking. And our 23-pound bird went into the oven Wednesday afternoon, as I always like to have it carved and ready well before the guests arrive on Thursday.
The holiday began with Sammi's arrival on Wednesday evening. As is the case every time she flies home, we were constantly monitoring the status of her flight from Norfolk to BWI and the connection to Islip. Despite the weather forecasters proclaiming doom and gloom for travelers, the delays were relatively minor.
The full contingent of guests arrived on Thursday morning and early afternoon: Chuck, Rebecca and Alex; Rebecca's parents Jim and Debbie and grandmother Avis; my brother Rich, sister-in-law Felice and nephew Adam; and Chuck's long-time friend Dave.
Not surprisingly, Alex was the center of attention, though he insisted on sharing the turkey hat that Aunt Sammi brought him. 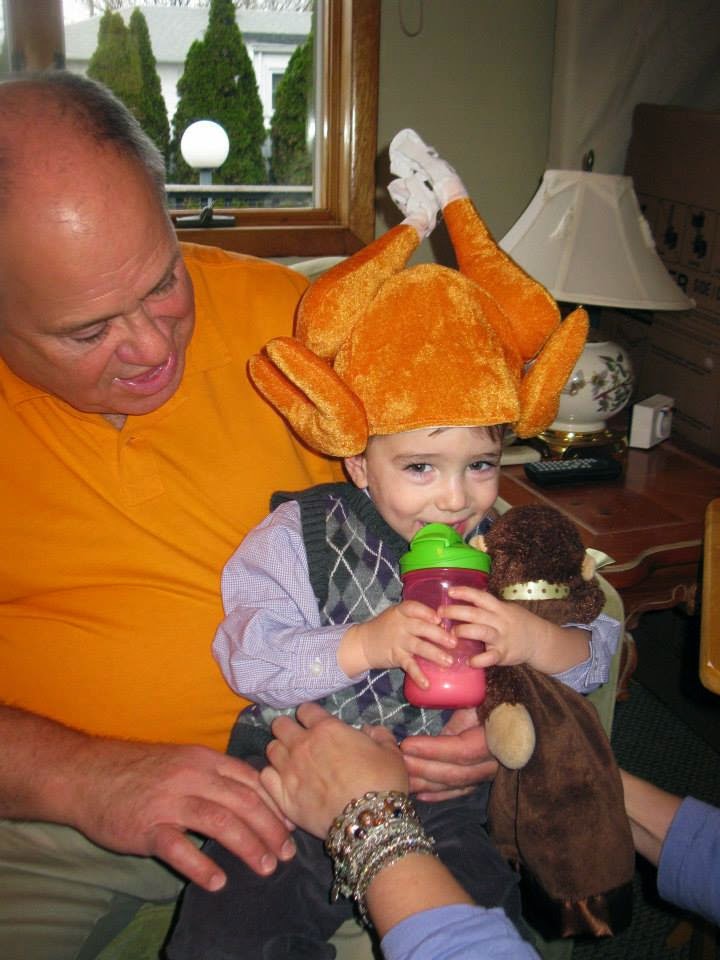 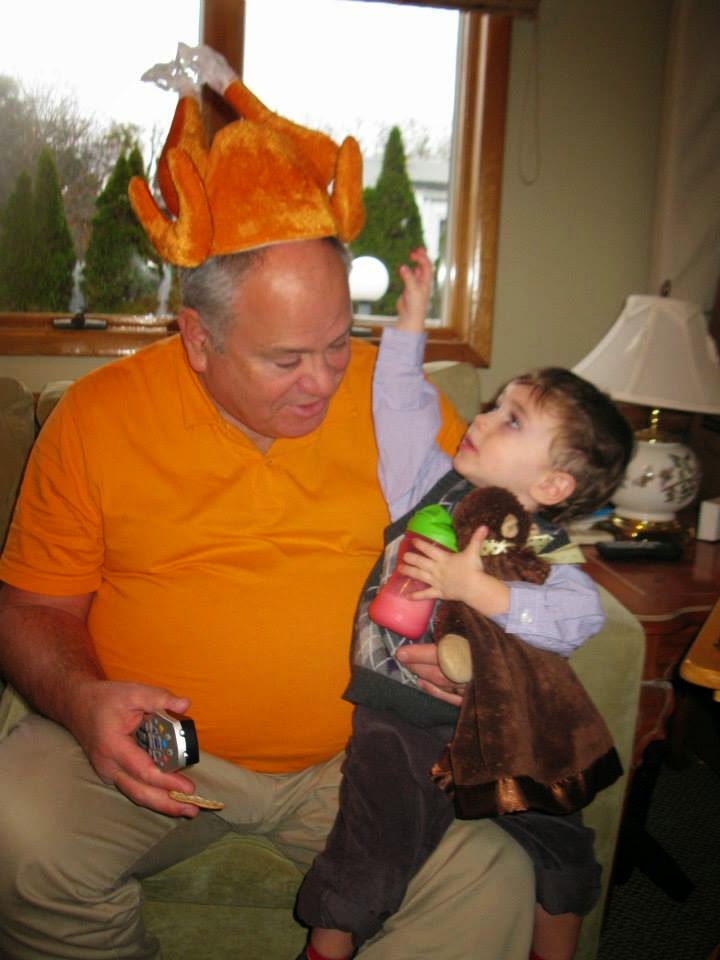 As always, though the turkey itself was not stuffed, all of the guests were and the few remaining leftovers will be lunch on Monday.

Another Visit from Alex 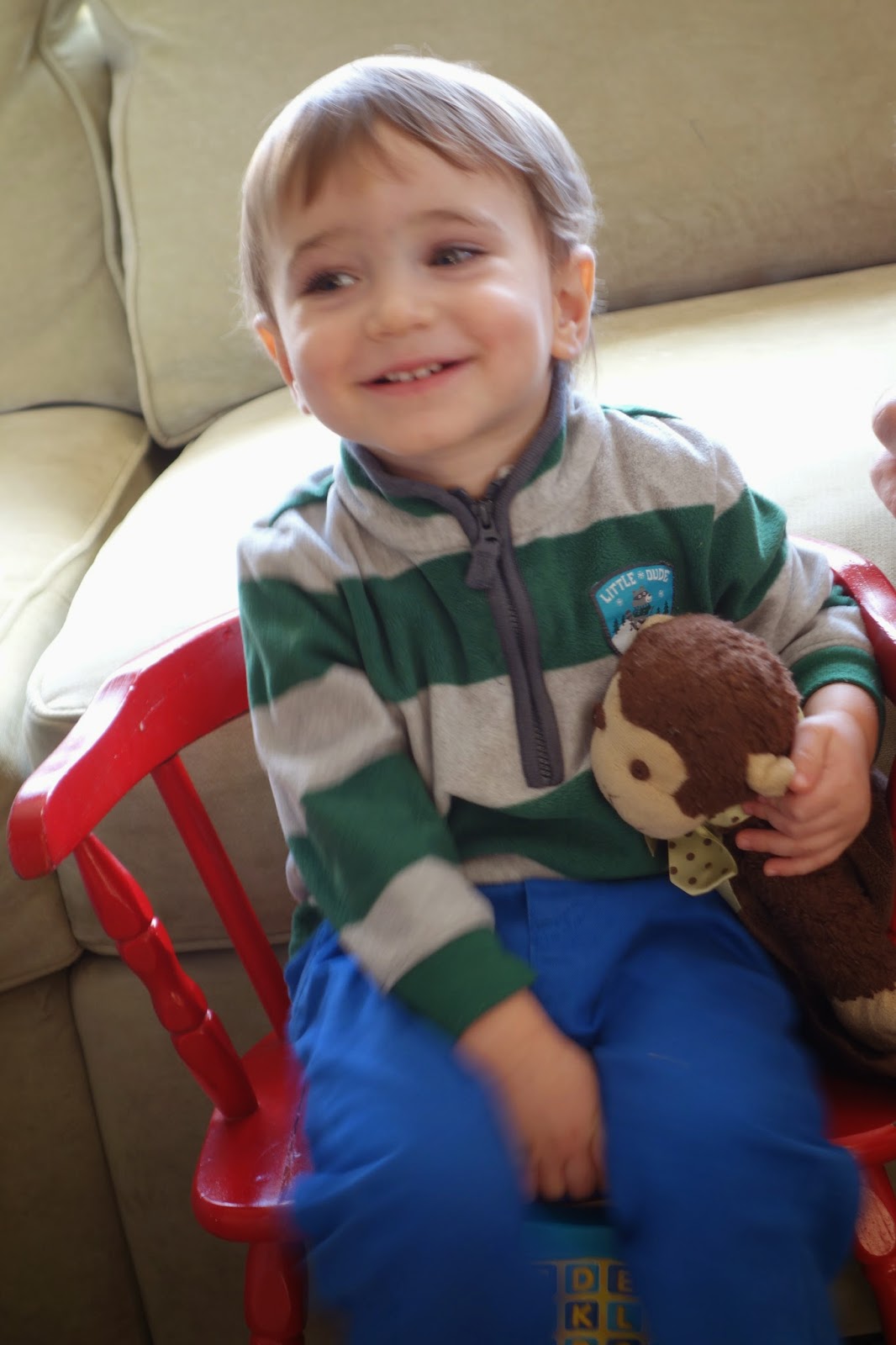 We offered Chuck and Rebecca another chance for a staycation, which they happily accepted, and so Alex came to spend the weekend with Gamma and Gappa. Unlike his stay last month, when the weather was great for outdoor play, this visit was much more an indoor one.
That did not deter the little dynamo in the least, as he read books, sang songs, made things with playdough, drew pictures, played with puzzles, watched Elmo's World and Truck Tunes videos and generally kept us on our toes from 6 in the morning till 7:30 at night. (Thank goodness he takes a nap!) 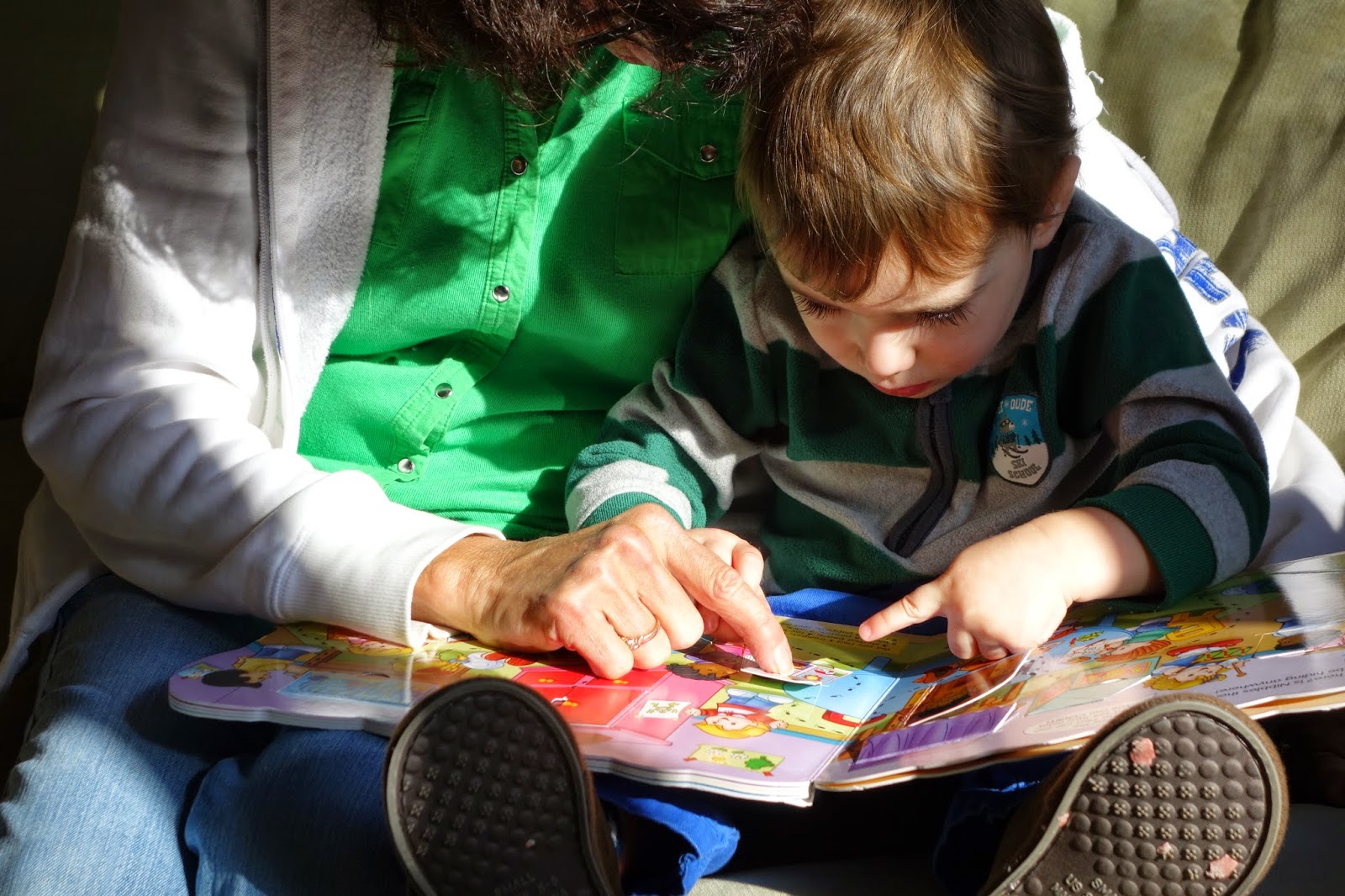 Saturday's adventures included a visit to the Long Island Children's Museum, which he thoroughly enjoyed, especially the big wooden backhoe that he could sit in. That was followed by continuing a tradition his father and Aunt Sammi enjoyed for many years -- a trip to McDonalds for a Happy Meal.
Alex also enjoys a wide variety of foods, many of which Gamma makes special for him. (Her pancakes were the big hit this time.)  Foods are especially delicious if Gamma or Gappa is eating them. Any time I have a banana, he will ask "Bite?" and happily chomp on it. And on Sunday morning, he ate as much of my bowl of oatmeal as I did. 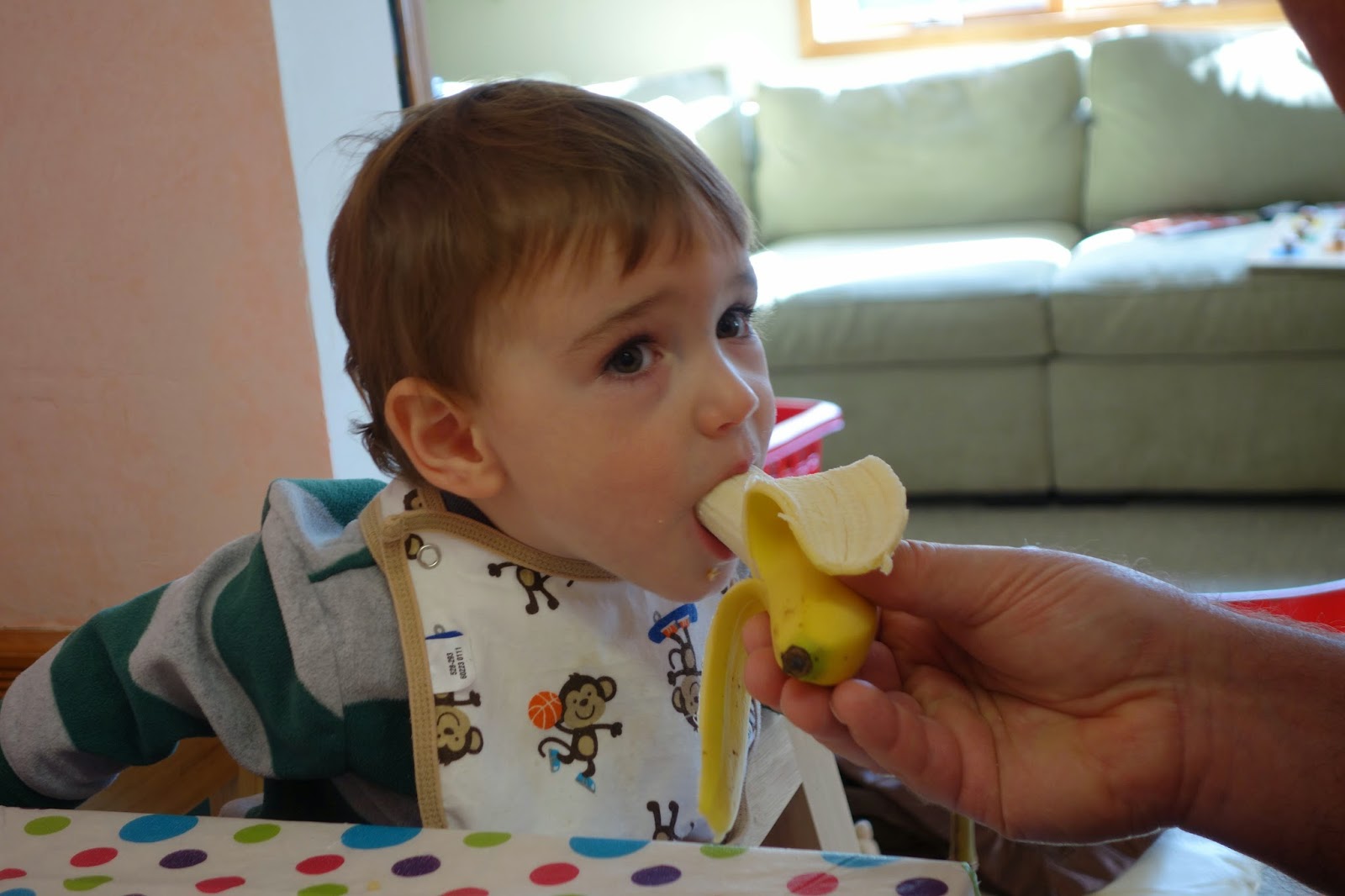 He and I were sitting at the computer Saturday morning, and my desktop photos cycled to one of the two of us with one of his wooden puzzles. He immediately recognized the puzzle and insisted we get it so he could imitate the picture. 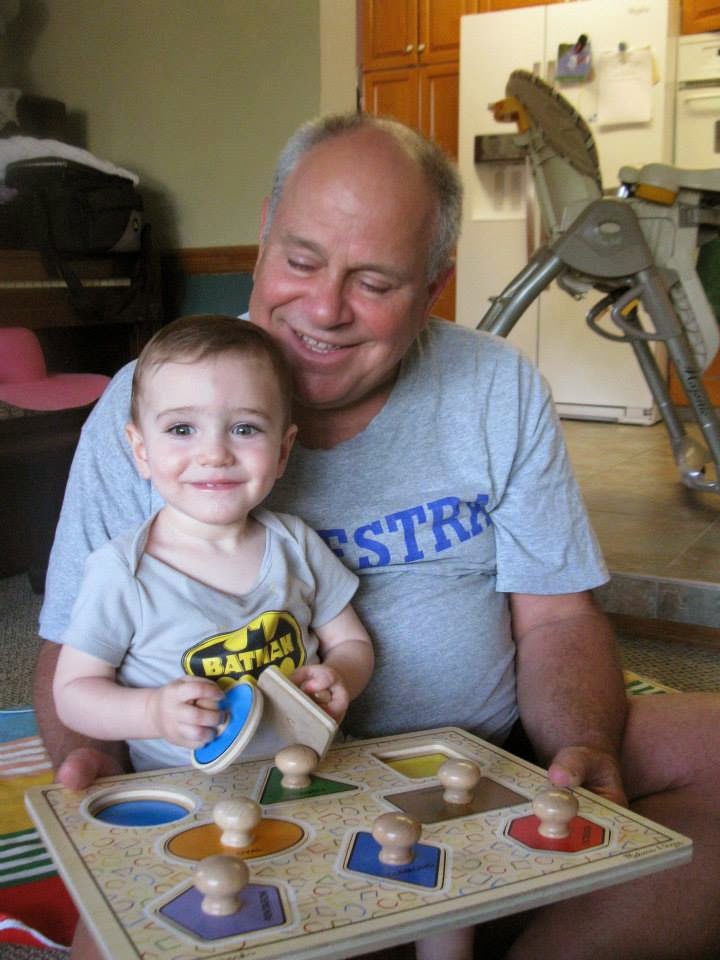 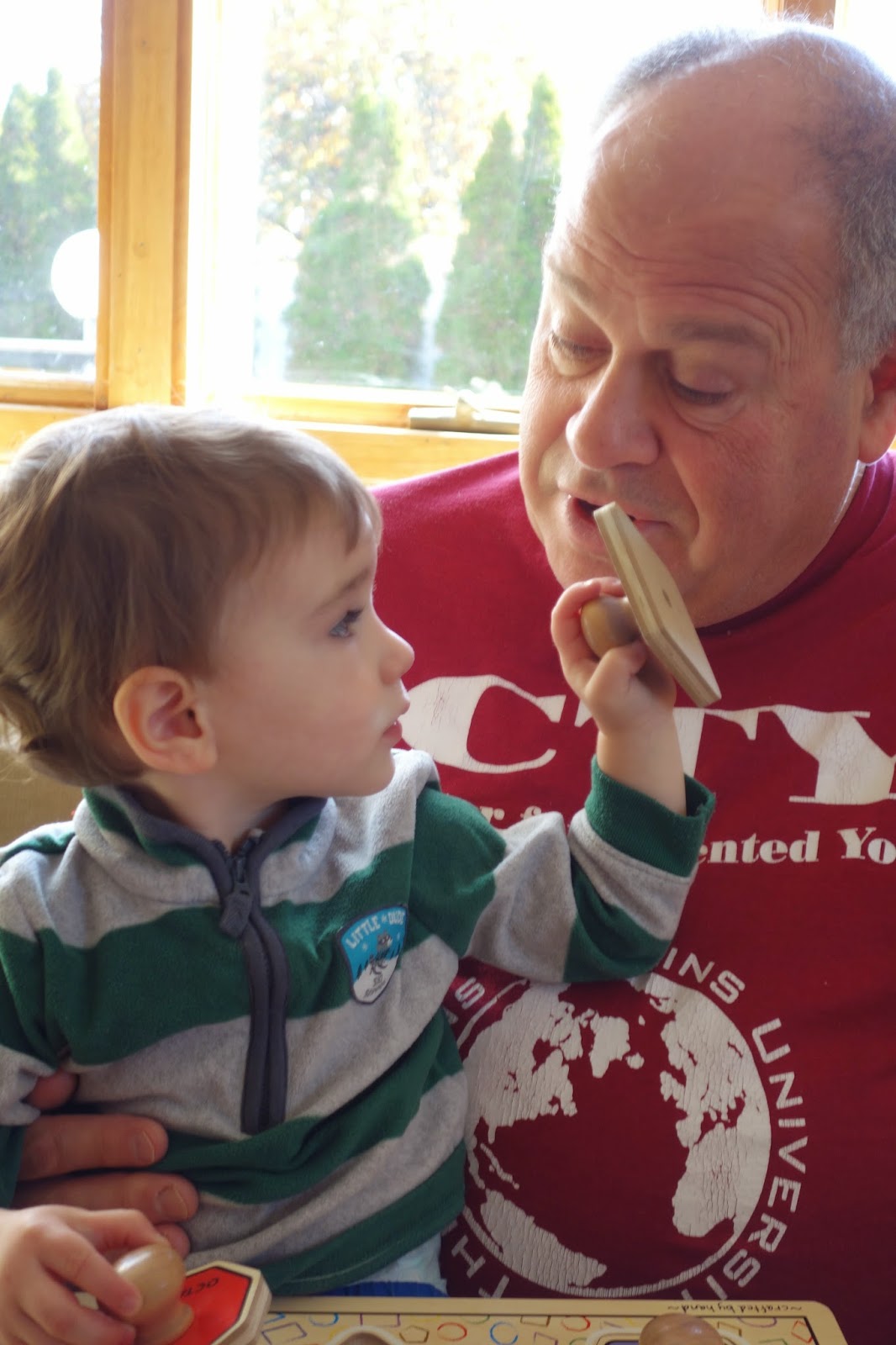 Alex will be back with us for another weekend in January (as well as visits with his parents for Thanksgiving and a weekend in December). In the meantime, Gamma and Gappa will catch up on some sleep. 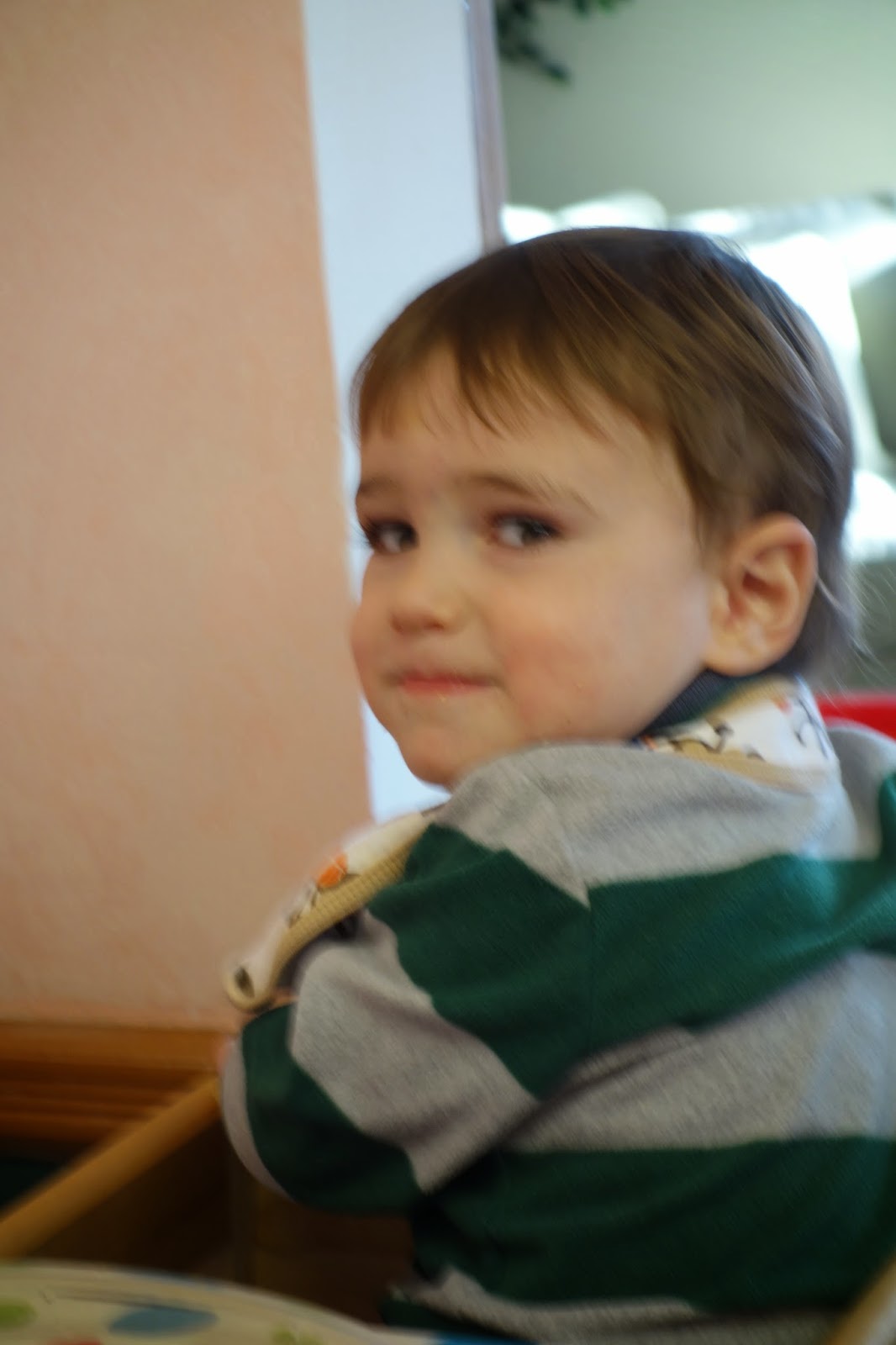 Posted by Bob Rozakis at Tuesday, November 18, 2014 No comments:

We went out for dinner with friends on Saturday night to a restaurant that we've eaten in for years. The food is consistently good and, though a bit noisy, the dining area is comfortable.

Things were going along fine at first. We placed our orders and our pre-main-course salads arrived quickly. Moments after our salads arrived, a woman we presumed was the manager or assistant manager asked us how everything was. We responded positively; she smiled and went on to the next table. A few moments later, our waitress asked how everything was. Again, we responded positively. Shortly thereafter another waitress along with a woman who actually was the manager (though you would not have guessed it based on the very casual clothing she was wearing) both stopped to ask us if everything was okay.

When our waitress cleared away the salad plates, she again asked how everything was. By this point, it was becoming amusing and Laurie started to count how many times we were asked. Our main courses arrived soon thereafter, along with another round of "How is everything" questioning by the variety of staff members, as well as someone who may have just been wandering by.

When the manager stopped by for the third time, just after we'd ordered coffee and dessert, Laurie pointed out to her that this was the twelfth time someone had asked us the same question. The woman seemed nonplussed when Laurie asked why we were being bombarded with concern about how our dining experience was going.

That was also about the time things started going south. We were given our bill, but it did not reflect the 20% off coupon our dining companions had presented via smartphone when they arrived. The coupon had disappeared into the ether and, as luck would have it, said smartphone's battery had run out in the interim. As a result, it would take a few minutes to have the discount applied to our bill by the manager.

No problem, as we were not in a rush. While we waited, Laurie asked if she get some more hot water for her tea. Coming right up! (Well, not really, because it never did arrive.)

We continued to chat, during which time the assistant manager again stopped by to ask how everything was. I was about to say that we were just waiting for the manager to adjust our bill, when I noticed that she was just a couple of tables away, no doubt asking other patrons how everything was. In fact, it was another fifteen minutes before we actually got the corrected bill.

One other thing I noticed was that, despite having a large number of people whose main concern seemed to be asking patrons how everything was, the restaurant was suffering a severe lack of staff to bus the dirty dishes. Three tables around us were left uncleared long after the diners had finished and departed.

We paid the bill and headed out, our path to the exit leading us right past the manager and assistant manager. I have to say we were all somewhat disappointed that neither of them asked us "How was everything?" as we went out the door.
Posted by Bob Rozakis at Monday, November 10, 2014 No comments:

The Adventures of Johnny Applepix

I did a lot of creative writing during my years in high school. Much of it was the adventures of Rob Boozakis and his pals in Clemont High School, which I wrote under the guise of Hobart Pumpernickel. (You'll find a recounting of Hobart's creation and an early example of his work here.) Prior to Hobart's debut, however, a lot of my creativity combined writing with my somewhat limited skills as an artist.

While I was still in elementary school, I had produced a "Sunday comics section" for the entertainment of my parents and my brothers. It featured strips like "Andy and Jojo," "Peter Groundhog," "Dat's Grownups" and my attempt to draw Superman.  I drew them, colored them, and delivered one each Sunday for a few months. For the most part, I think I recycled jokes from other comic strips and joke books that I read.

In seventh grade, my friend Billy and I spent part of the summer drawing a collection of Rube Goldberg-esque cartoons. As I recall, he had a plastic stencil that had beakers and coils and other "scientific" equipment that we used to make these inventions. Included in these drawings was a character who had a nose the shape of a potato and three hairs sprouting from the top of his head. He eventually got a name -- Penelope Jones (yes, I know Penelope is a girl's name, but he was a boy nonetheless) -- and ended up "starring" in a couple of notebooks' worth of gag cartoons that I drew.

By ninth grade, the world of Penelope Jones had expanded to included superheroes like Superduck and Batduck (who were not ducks; in fact, both had the same type of potato nose that Penelope had), secret agent George P. Wombat (who was not a wombat, but did have a different kind of nose), and Penelope's brother Schnooky Poo (whose face was never seen, so we have no idea what his nose looked like). I had advanced beyond single-panel gags by this point and was writing and drawing comic strips of their adventures.

In the fall of 1966, a new character appeared, inspired by one of the classmates of my brother Richie. The lad had a mole/birthmark on his face and my brother started calling it an "applepix." No one recalls where he came up with that name for it, but that's how Johnny Applepix got his moniker. It wasn't long before I started drawing comic strip adventures of Johnny, beginning with one in which the applepix starts to grow and takes over his entire head. In the course of seven pages, Johnny is mistaken for the master criminal Boscofinger, falls into a time tunnel that takes him to the near and far future, and is even mistaken for Richard Kimble's one-armed man.

Johnny's other adventures have him trying to win a free sweatshirt from a local radio station, attempting to collect a reward by capturing an escaped fugitive, and turning into a master criminal after he breathes in gas from a meteor.

In all, there are seventeen pages of Johnny Applepix Archives, all drawn in a single marble notebook. Only a few people ever saw them, but of those who did, more than one said, "Gee, Bob, you should be doing comic books." Who could have guessed...
Posted by Bob Rozakis at Saturday, November 01, 2014 No comments: