It is fairly safe to say that Alex has never been in a car when he wasn't in a car seat. Further, he has never been in the front seat of a car. And certainly, he's never been in the driver's seat.
His fascination with trucks has grown into one for cars as well. to the point where he has told me that one of the cars he wants to have is a red convertible. He is well aware that I still have my Sebring but, until today, he has never been in it.
This morning we decided to go for a pretend ride. We got in the car, put down the top, and then went for a "ride" around town. We also drove to Jersey City and back, because he knows the route. "We go in the Holland Tunnel, then on the Manhattan Bridge, then on the Kosciuszko Bridge, and the Long Island Expressway." (It is always entertaining to see the looks on people's faces when they hear him say "Kosciuszko Bridge.") 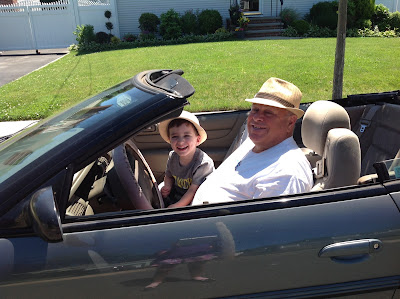 I let him sit on my lap in the driver's seat. and after a few minutes he said, "Papa, let's change seats." So I moved over to the passenger side and the future driver took over. He asked about the dials, the buttons and everything else on the dashboard and steering wheel and then said, "Okay, let's go to the store."
During the course of his "driving lesson," I taught him the hand signals for a right turn, a left turn, and slow/stop. So, every time I gave him directions to make a turn, he stuck his hand out the window and signaled. (Do they even teach the hand signals in driver's ed any more?)

He enjoyed it so much that after dinner he wanted to go for another pretend ride. This time, we went to the barber shop, McDonalds (to the drive-thru, of course), the library, and the ice cream shop. But then we had to drive home because it was time for his bath.
Posted by Bob Rozakis at Friday, June 10, 2016 No comments:

As my 65th birthday present, Chuck and Rebecca got me tickets to see the Monkees in concert. Well, half of the Monkees, since only Mickey Dolenz and Peter Tork are featured in the promotions. 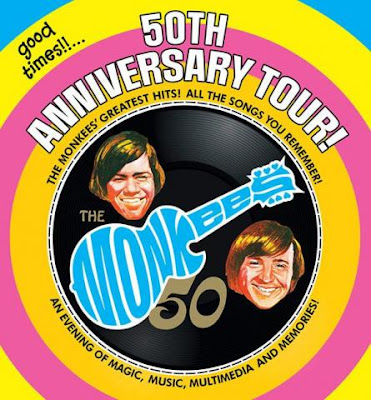 It was an entertaining evening, as Mickey and Peter performed lots of old favorites along with a couple of songs from their newly-released album. The onstage performance was backed by a giant video screen that included clips from the old TV show, concerts, home movies, and other performances. These continued through the intermission and even included some commercials for Kellogg's Rice Krispies that appeared on the show.
Fellow Monkees Davy Jones and Michael Nesmith were represented as well. Tracks from the 1960s of Davy, who died in 2012, singing "Shades of Gray" and "Daydream Believer" were combined with the live performance. The latter became a singalong for the audience as well.
To bring Michael in as a part of the show, they had quite a clever gimmick. They called him on Skype! From the comfort of his home, Michael joined his fellow Monkees for a song.
It is hard to believe that I first heard many of these songs fifty years ago. Peter, commenting on the fact that they debuted in 1966, said that the equivalent to this concert back then would have been people going to see an act that was popular in 1916. Enrico Caruso, anyone?