I've been named Guest of Honor at Uticon, taking place Sunday. If you're in the neighborhood, stop by and say hello.
Meantime, the lectures I gave about the history of comics and graphic novels drew impressive crowds at both the Utica and Rome campuses of Mohawk Valley Community College.
Posted by Bob Rozakis at Friday, September 30, 2016 1 comment:

An Evening with Tony 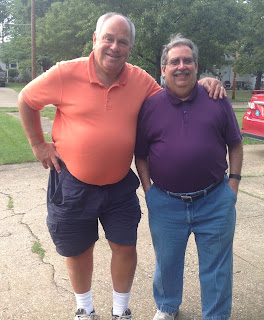 I caught up with my old pal Tony Isabella last week and we had a great evening. Wives Laurie and Barb had a good time together as well, deciding (probably wisely) to take a walk together after dinner and leaving the guys to talk comics and "the old days."
It's been a particularly good week for Tony as his years-long battle with DC over Black Lightning seems to have been settled quite nicely in his favor, including a TV pilot for Fox that is in the works. (Coincidentally, I found out about that the night before via a Google Alert.)
Our paths don't cross often, but I told Tony I'd love to be part of Driveway Con if he decides to have one next summer. Tony held a Driveway Con in the summer of 2014 as part of his garage sale. (Read about it here, here and here.) Something for all you fans of old comics guys to look forward to.
Posted by Bob Rozakis at Tuesday, September 13, 2016 1 comment:

In mid-August, while Laurie was in Australia with Sammi, Chuck and Rebecca asked if I could babysit Alex overnight so they could go to a nearby convention. As my little buddy and I seem never at a loss for things to do, I said okay.
I drove to their house and they took the car to drive to the con. Since it was brutally hot, Alex and I spent most of the time in the air conditioning, playing and doing activities. One scenario involved the "rescue squad" chasing a bad dump truck who had stolen lollipops from the other trucks. (A helicopter grabbed up the lollipops with a grappling hook and flew them to safety.) We painted, we made things with Play-Doh, we read books, and we did much more.
By mid-afternoon, we were both more than ready for a nap.

After naptime and an afternoon snack, Alex said, "Papa, we should go to the Liberty Science Center."
"We can't. Mommy and Daddy took the car."
"It's okay. We can walk to the light rail." The light rail is about half a mile away.
"It is too hot to walk that far."
"We could take the stroller."
Instead, we went outside to the sandbox where he got frequent sprinklings from the hose to stay cool.

When Laurie and Sammi Skyped in the late afternoon and Laurie asked Alex what he had done all day, he said, "I watched some videos."

Alex came and stayed with us for the better part of a week in August. During that time, in addition to the usual playing with every toy in the house, he attended two programs at the library, had two lunches at McDonalds, and a personalized visit to the local fire house.


In addition to his new favorite thing to do -- "driving" the convertible -- he had swim time in the pool with Papa, chalking the walk with Grandma, and picking vegetables in the garden (and then eating them).

While I called it Camp Papa & Grandma, one of Laurie's friends said it was more like "Alex on a Cruise."  After all, there was unlimited food, plenty of on-board activities, a variety of excursions, and he couldn't leave the "ship" without an escort.
When it was time to take him home, rather than get in the car, Alex walked back to the front door and said, "I want to stay here." Small wonder, eh?
Posted by Bob Rozakis at Monday, September 12, 2016 No comments: