Hey! I Wrote Another Book! 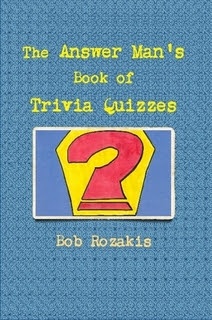 Back in 1995 when AOL was king of the internet and their chatrooms were the place to be, I began hosting a DC Comics-sponsored chat on Monday nights at 10:00. Most of the other DC chats were hosted by the editors and focused on one character or another, but, as the Production Director, I had no specific topic to cover. So I named the chat "Anything Goes."

We covered all variety of topics related to DC and its characters, books, and history. And before too many Mondays had gone by, I started asking trivia questions.

Trivia quizzes and my Answer Man sobriquet date back even further in DC Comics history... to 1976, when I convinced then-President Sol Harrison to let me create a weekly Daily Planet house ad to appear in the books. A faux newspaper that hyped events in the various titles, the Planet also included trivia quizzes, mini-puzzles, and, ultimately, Ask the Answer Man, where readers could have their questions about DC answered..

The Answer Man column became so popular that I ended up expanding it to its own page in addition to the Daily Planet appearances. In fact, despite the more than 400 stories I wrote and the various contributions on the production side of the business, I am still best remembered by many fans as the Answer Man.

Though the Daily Planet and the Answer Man column were long gone by the time the AOL chatroom debuted, old habits die hard.  I was answering all sorts of questions about DC's characters and history and it was not long before I started asking trivia questions of my own. At first, the questions were random, inspired by topics that came up during the course of the hour. These evolved into a series of questions, based on a theme, that I prepared in advance.

As guessing the theme of my questions became another challenge, I added "First Letter Clues" that spelled out a hint. And then I would throw in BobRo's Fun Facts to Know & Tell, bits of trivia that more often than not also related to the theme in some way. I continued to host the chatroom for almost three years after leaving DC in 1998, creating many more trivia quizzes (as well as providing a daily trivia question at World Famous Comics).

A few months back, I came across a disk with a large number of the chatroom quizzes and decided to collect them in book form. Early quizzes were modified to fit the First Letter Clue format and I added Fun Facts where there were none originally. And so, The Answer Man's Book of Trivia Quizzes was born. (It's available right now by clicking on the title.) One hundred and one quizzes, more than 1300 questions, plus Fun Facts and Answer Man Memories! Hours and hours of fanboy fun!

While you're there, feel free to order copies of The Secret History of AA Comics and my novel, The Junkyards of Memory.
Posted by Bob Rozakis at Wednesday, May 30, 2012 1 comment:

Four days and some four hundred miles apart, Chuck and Sammi each received a master's degree and, proud parents that we are, Laurie and I made the trips for each.
﻿ ﻿On Sunday, Sammi received her Master's in Educational Administration from The College of William and Mary so we made a weekend of it, driving to Williamsburg, Virginia on Friday and home on Monday. We went sightseeing in Norfolk on Saturday and on Monday we stopped at the school where Sammi works, getting to meet her students and colleagues.
﻿
﻿﻿﻿﻿﻿﻿﻿﻿﻿﻿Chuck's MBA from NYU's Stern School of Business was celebrated at Radio City Music Hall in New York City on Thursday. Needless to say, it was a much shorter trip to get there. ﻿﻿﻿﻿﻿﻿
﻿﻿
**
Anyone who has ever been to a graduation ceremony knows what the speeches are like. Phrases like "follow your dreams," "do the right thing," and "you'll always be part of the (name of school) family" abound. So the highlights of the two ceremonies had nothing to do with those.

The President of William and Mary told the story of how the college recently adopted a new school mascot. There were many suggestions, many meetings, and much discussion, but he finally opted for a griffin, the mythical half-eagle / half-lion. Having made that decision, however, he was faced with a bigger one: Should the griffin wear pants?
The photo shows his decision on that pressing matter.
﻿﻿
The highlight of the NYU ceremonies came in a speech by one of the students. Speaking about the friends he had made during his time at the school, he said that he hoped in ten or twenty years he would still have one of them, "because I would have paid $98,000 for that friend!"

**
Laurie and I have both been interviewed a number of times over the years and, invariably, we are asked, "What do you consider your greatest achievement?" Our response is always the same: "Chuck and Sammi!"

In the World of Wacky News

A online news story from the Huffington Post reports that a man in Wisconsin started picketing in front of a local fish restaurant because they advertised an "all-you-can-eat" Friday Fish Fry and cut him off after a dozen pieces of fish. According to the report, after he whined that they were not honoring their advertising, they gave him eight more pieces of fish to take home with him. He wasn't satisfied with that, so he called the police...who, wisely, opted not to act.

Claiming that someone has to stand up for consumers, the man plans to continue picketing every Sunday until the restaurant allows him to eat all he can eat on Fridays.  Meantime, the Associated Press reports that he has run up a substantial tab at the restaurant.

And people wonder why there's an obesity problem in this country?

Longtime readers of this blog are aware that the opening and closing of the pool each year are celebrated as First Dunk and Swimsover.

Despite weather in both March and April that made it seem like we were in for a very early summer, the pool was not opened until last week. In fact, we took the cover off just as the long-awaited April showers started arriving every day in May.

This past Thursday, with the "Temperature Team" checking in with water temps ranging from 68 to 70 degrees, I decided First Dunk had been delayed long enough. It wasn't a long swim by any means. First dunk is always just that -- I get in, I get wet, I get out. In any case, pool season has officially begun.

One other note: Tommy Turtle has been retired from the "Temperature Team." The perennial pessimist of the group -- he surely would have recorded Thursday's water temp as 48 degrees -- started to disintegrate and had to end his career. No word yet about who will replace him and join Ducky, Swanee, Snorkelduck, Polar Bear Pete, and CPO Sharkey on the team.
Posted by Bob Rozakis at Sunday, May 13, 2012 2 comments:

Maybe the demise of the dinosaurs wasn't the result of a massive meteor crash or volcanic activity after all. According to a pair of British scientists, the giant beasts may have farted themselves into extinction.

The two researchers estimated that the dinos, particularly the plant-eating sauropods, produced 520 tons of methane a year, as much as is being produced today by man-made and natural sources. (Cows and other farm animals produce about 100 tons of methane a year.) They speculate that this was substantial enough to cause global warming, climate change and the eventual demise of the giant beasts.

You have to wonder how future portrayals of time travelers visiting the distant past might be done.  There certainly shouldn't be anyone commenting about how clean and unpolluted the air smells. And, instead of fleeing when they hear the roar of a tyrannosaurus rex, it should be a different sound that scares them.

If nothing else, this theory should result in one change.