Teacher of the Year

Congratulations to my daughter Sammi on being voted Teacher of the Year!

The Histories of Comic Books

Comic books have been with us for more than three-quarters of a century and while interest (calculated by the sales) in the books themselves seems to be waning, the growing number of books about their origins and creators being cranked out seems to indicate that there is an audience for the history of the medium.

In the latter group goes the book Superheroes!: Capes, Cowls and the Creation of Comic Book Culture by Lawrence Maslon and Michael Kantor. This is a companion volume to a documentary of the same name that aired on PBS. There are lots of illustrations, including a number you can find in virtually every other history of the industry. (To be fair, how could you do a history of comics without having the cover of Action Comics #1 in it?)

In reading these books, I often find statements of "fact" that are wrong. Some of these can be attributed to the author getting information from one source and not verifying it with anyone else. Discussing the heroes of the All-American line in the 1940s and the Justice Society, the authors say, "The heroes created there, often by Sheldon Moldoff, were admired but not nearly as successful as Superman and Batman, and none of them had his own book." Now, Shelly was a prolific artist throughout the Golden and Silver Ages and spent much of his career being a ghost for Bob Kane on Batman, but he is not credited with creating the heroes of the AA line.  And then there's the little matter of The Flash and Green Lantern, who starred in Flash Comics and All-American Comics as well as their own solo titles.

Particularly cringe-worthy in this book because it was a fact very easy to check is the line in a paragraph about servicemen reading Superman comic books during the war. "Apparently, there were several 'dumbed-down' issues of Superman, with simpler vocabulary, available at induction centers."
"Apparently"? No, it's a fact! DC produced versions of six of its books for the U.S. Navy, to help personnel with vocabulary and reading comprehension.

And it doesn't take much online research to find them. 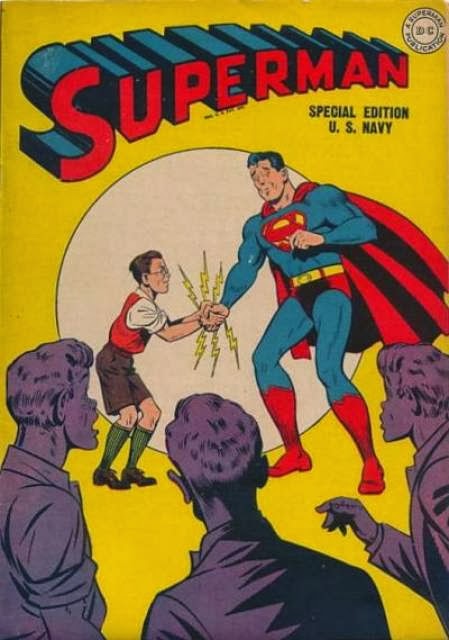 It would be great if authors of these histories had their work vetted by an industry professional. Bob Greenberger, Paul Kupperberg, Allan Asherman -- they are just a few of the guys who've been in the biz and know the back stories. They and others like them are easily found online and whatever it costs to have them check the work is worth it.

Meantime, I'll keep reading these books and wishing they were more accurate.
Posted by Bob Rozakis at Sunday, March 09, 2014 1 comment:

There is a particularly annoying series of radio and TV commercials in which a group of school children sing "Thanks for being a friend" to people who are buying New York State Lottery and Scratch-Off Game tickets. The idea behind them is that "a portion of the revenue" from these sales goes towards the state education budget, so every time you buy a lottery ticket, you're helping school children.

I have to admit I was skeptical about just how much of the money actually went towards education. A little research revealed that it is, in fact, about 30%, which is far more than I expected. (Sixty percent is paid out in prizes and the remainder goes for administrative fees, etc.)  On the other side of the ledger, the money received from these gambling ventures represents about 5% of the state's education budget, where the bulk of the funds comes from taxes.

So, if I buy a lottery ticket for a dollar and 30c of it goes towards education, isn't that really a tax I'm paying? After all, if I (and everyone else) did not buy lottery tickets, we'd be making up that 5% by paying higher taxes. So shouldn't I be able to claim it as a deduction?

Or, better yet, why doesn't the state tie the lottery directly to paying your school taxes. For every dollar you pay, you get another lottery ticket. Pay your taxes and get a chance to win a million bucks!In fact, since people buy more and more tickets as the size of the prize increases, imagine them volunteering to pay extra taxes just to get more shots at a multi-million dollar payday!

That would make those singing kids really happy!
Posted by Bob Rozakis at Friday, March 07, 2014 No comments: