It started as a joke during our summer weekend volleyball games that we should get together on New Year's Day and play, regardless of the weather. As our outdoor season came to an end, the idea had grown from "Ha ha, yeah, right!" to "We're really going to do this."
A discussion about how many people would actually be available on New Year's morning resulted in the change to Saturday, January 7th. Then came the logo...

And then came the day we were scheduled to play, with a temperature of 22 degrees and plenty of snow in the forecast. Would anyone actually show up, especially since it started snowing an hour before game time?
You betcha! Twenty-six crazy volleyball players had a great time for two hours, and "Nobody's going to believe we did this" was heard more than once.
Afterward, it was off to a nearby pub to warm up and have lunch.
Of course, to commemorate the event, there were t-shirts.

And even a video by Roy, who had a "helmet-cam," which you can check out here. (You can see me doing an over-the-shoulder return at 1:35 in the video.)
We're already planning for next year!

Our second year as Men Seeking Pizza had us expanding our horizons, exploring pizzerias in nearby Plainedge and North Massapequa along with revisiting many of the Farmingdale ones we'd ranked in 2015. As with last year, we found a few really good pies, many that were middle-of-the-pack-but-I-wouldn't-turn-it-down, and a couple places that, well, let's just say we're not going to bother going back in 2017.
This year had an interesting turn of events when the pizzeria we ranked as #3 went out of business (and came back as a Mexican restaurant weeks later). We decided that there was no accounting for taste in that neighborhood as the rest of the pizzerias in the area, some of which we ranked very low, are still in business.
As it turned out, our semi-finalists for 2016 were three of the top four from 2015 - Mary's, Piazzetta, and Marino's - along with newcomer Crostini's. In the first round, Mary's, the 2015 champ, beat Crostini's and Marino's outscored Piazzetta.  The final face-off ended with two great pies and a close vote, with Marino's coming out on top as our 2016 champion. 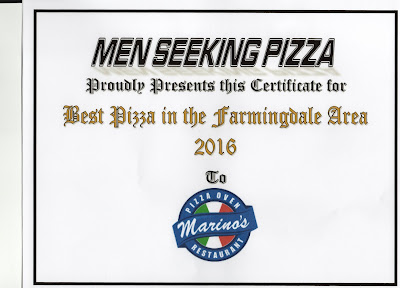