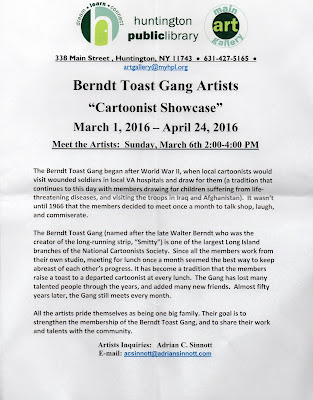 Laurie and I took a drive over to the Huntington Library (where she once worked as a clerk) to see a display of art by the members of the Berndt Toast Gang. The Gang is a branch of the National Cartoonists Society, made up of artists who live (or lived) on Long Island.

Among the art and artists most recognizable to comic book fans:
* A Wonder Woman page by Don Heck
* A Superboy and Krypto double-spread penciled by Kurt Schaffenberger and inked by Gang member Joe Giella (and scripted by my pal Paul Kupperberg)
* A painting of Batman, also by Giella
* A Phantom daily strip by Sy Barry
* Two sketches by Golden Age artist Craig Flessel
* A Mad piece by Mort Drucker

There were plenty of other artists represented, some of whom I'd heard of and some I was unfamiliar with. I would have liked a bit of biographical information about each of the artists, but even without it, this is a display worth seeing if you are in the area.

"Here's your chance to wear that shirt your Great Aunt Edna bought you the week after she went blind!"
That was how we invited the DC staff to participate in Loud Shirt Day, one of a variety of crazy morale events dreamed up by Robyn McBryde and yours truly back in the 1980s. The staff gathered in the Production Department and watched each contestant emerge from the statroom in all their eye-blasting finery.
Everybody voted for their favorite and the winner received a Superman tie that was created by my wife Laurie.

From a 15-year-old online column comes an interview conducted a decade and a half before that...


In 1986, WCEYE, the in-house newsletter for employees of Warner Communications, interviewed yours truly about ‘Mazing Man and the Centurions tie-in book DC was about to publish. I recently unearthed a copy and thought I’d share some of it with you… 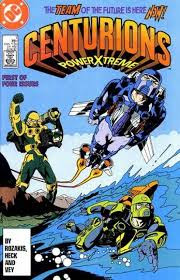 Q: What is a Centurion?

“It’s a tie-in to a toy product of Kenner Toys. We are publishing a comic book in conjunction with the release of the toys. There’s also a cartoon series and probably 5,000 other licensed products coming out at the same time.

“It takes place in the 21st century and the three heroes wear suits which give them weapons and all sorts of different powers. There’s one whose powers are land-based, one in the air, and one in the sea. They all get involved in plots of Doc Terror who’s the villain.

“What I’ve done is take the stack of information they gave me (which is about a foot high) and weeded through it all to find what I wanted to use in the comic book stories.”

Q: Suppose you were starting a series from scratch. Who would design the characters?

“The artist usually decides. The series I just finished doing, ‘Mazing Man, was a creation of artist Stephen DeStefano and myself. He designed the original characters and then we sat down and worked out their personalities.

“When we would introduce a new character, I would decide what the person should look like and Stephen would interpret what I was saying.”

Q: After the story is written and drawn, what happens? Who approves it?

“On  ‘Mazing Man, Stephen and I would sit down with the editor to get our story ideas approved. With Centurions, we’ve got an extra step. Since it’s a licensed series, the people who license it have to approve it as well.”

Q: How does the creative process work?

“It’s different for each team of writer and artist. With  ‘Mazing Man, since Stephen and I both had a hand in creating the characters, the two of us worked together to come up with the stories. We’d work out a plot and get three-quarters of the way through and sometimes say, ‘No, this wouldn’t happen. They wouldn’t DO this.’ Even if we hadn’t explained all their behavior in the book itself, we knew how they would act.”

Q: Sounds like you’re writing a TV or movie script.

“There isn’t much difference when you’re making up a story. In fact, with ‘Mazing Man we tried to do it as if it was a TV situation comedy since that book was aimed at an older audience.”

Q: And once the plot was decided upon?

“I gave Stephen a page-by-page breakdown of what was going on. He would draw it and bring it back and I’d write dialogue to fit the panels.

“With Centurions I’m using a slightly different approach. I’m giving the artist [Don Heck] panel-by-panel descriptions of what’s going on and underneath it there is rough dialogue. Since these are new characters, a new book, and an artist I haven’t worked closely with before, I’m giving him more. He’s got the range to say that I’ve given him six panels and he wants to do six or I’ve given him eight and he wants to do it in six. He just has to know that the characters have to say all of this in a given page and make sure there’s room for them to say it.”

Q: What happens after the art is done?

“Once it’s done in pencil, the artwork comes back to the editor, who approves it. I get it again to write the final dialogue, which will also go to the editor for approval. Next the dialogue is lettered and the art is inked for reproduction.

“At that point, with Centurions, we have to get approval again from the licensor. They have already approved my raw script so their next approval would be on the finished artwork. We then make a photostat of each page and get it colored. The colorist has a limited palette of 64 colors that are tints of red, yellow and blue in combination. When the pages are colored, the separations are done and then it’s printed.”

Q: Is a book market-tested prior to publication?

“Usually not., Once we’re committed to publishing a book, there’s no pre-testing. Sometimes before a book is on the schedule, samples of the art will be sent to retailers in the direct sales shops that cater to comic book buyers and we get peoples’ reactions. But for the most part, the decision is made here by Jenette Kahn, Dick Giordano, and Paul Levitz. Sometimes it’s decided to do just six or twelve issues to see what will happen.”

Q: So how do you gauge what will appeal to young readers?

“I’m using my five-year-old son Chuckie as my consultant on this book. Centurions is aimed at a younger audience – the same kids who will be watching the cartoons and buying the toys. Chuckie has seen Centurions on TV and is excited about the book. If he understands the story, then I feel it works. Additionally, if I can write a story that I as a parent wouldn’t mind reading to him, all the better. That way I won’t drive parents crazy when they read it to their kids.

“I’m taking both sides and thinking that if I was buying this comic book for my son, he would understand it and I wouldn’t feel like a complete fool reading silly dialogue and a story that made no sense to him.”

Q: How does DC promote its new books?

“We advertise them in our own books. There are also a number of comic book fanzines that the fans read and we advertise in those. We’ve done posters, postcards, buttons and bumper stickers. It varies from book to book. Those decisions are made by the marketing department.”

Q: Where are comics sold besides newsstands?

“They are sold in comic specialty shops and in places like 7-Eleven and in ‘mom-and-pop’ candy stores, if there are any of those left in the world.”

“We’ll keep publishing it if it makes money. 'Mazing Man had a lot of fan support and good reviews, but it was just on the wrong side of acceptable sales.

“We’re usually committed to twelve issues. It’s not like the TV networks where they cancel a show after one week. Also, by the time the first issue goes on sale, if you haven’t finished issues four and five you’re in a lot of trouble on a monthly book.

“The audience can be very strange. I would think that an interesting set of characters, with good stories and artwork, would sell a comic book, but that’s not necessarily the case. I look at some of the things being published and say, ‘Why is this a big hit?’ What seems to be selling these days is teams of super-heroes.

Q: So how do you think Centurions will do?

“I hope Centurions will appeal to a different audience in addition to the regular comic book fans. We’ve got a pretty good shot with the younger audience, the kids who are watching the cartoons and playing with the toys, assuming that the toys do well. My son keeps asking if I’ve finished an issue yet. I try to explain to him that it takes six months from beginning to end to get an issue published.

Q: But based on his reaction, it looks like a hit?

“I hope so. The licensor has given us some free rein. I’ve established a history of the characters that wasn’t done with the cartoon show or with the toys. I’ve fleshed out a kind of 21st century civilization that ties in with the things going on in the book. I think it’s interesting and fun. Hopefully, the readers will think so too.”
Posted by Bob Rozakis at Friday, March 04, 2016 No comments: