A Visit from Alex

I drove home from CTY Friday night to spend Saturday with my favorite little buddy. He arrived with his parents on the train  in the late morning and, after lunch and a failed attempt at a nap, we set out on our adventures.
At the top of the list were haircuts for all the men. ("First I get a haircut, then I get a lollipop, and then we go to McDonalds.") I don't know if it was the first time that the barbershop had three generations there at the same time, but it was a first for us. With Chuck in the chair next to us, Alex sat on my lap while the barber ("His name is Alex too!") cut his hair. After they were both done, it was Papa's turn; my haircut is the quickest since a) it's all done with the clipper on one setting and b) there's a whole part of my head that doesn't have any hair any more.
Alex did get his lollipop -- a yellow one -- and then we stopped at the drugstore to pick up a prescription. As it turned out, they had a free lollipop jar. Alex did not pick one for himself, since he already had one, but chose ones for Chuck and me. (He eventually ate them for us.)
We went to McDonalds and Alex got his Happy Meal, but managed to eat only the french fries and one bite of the burger. (The rest  came home and became his Sunday lunch.)
Back home, he spent time playing in his sandbox and swimming pool with Grandma, who was then able to get him to take the long-delayed nap.
A variety of other activities filled the time before and after dinner, including making pudding with Mommy, reviewing all the toys in the basement with Daddy, and making Play-Doh spaghetti and french fries with Papa.
He then decided it was time to go outside with the chalk and some of his trucks. Alex's current favorite is the firetruck, which is always driving off to deal with emergencies. He had me draw a road on the driveway for the firetruck to travel on. Then I had to add a fire station for it to park in, along with a cat in a tree and a house on fire.
After a snack and his bath, it was time for a story and bed. It should be noted that Papa's default story is about a little boy named Alex and what he did that day. It took awhile for him to get settled, but then he slept through...
...till 5:00 a.m., when he was wide awake and proceeded to tell Papa stories and all of his plans for the day. 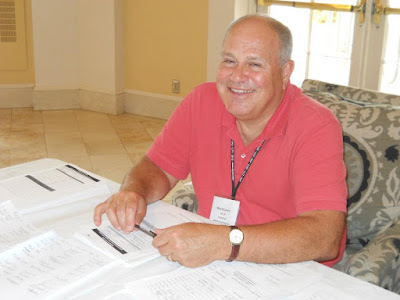 This is CTY's twentieth year at Washington College in Chestertown, Maryland and over the two decades, I have greeted thousands of students and their families during registration.
"The Bob Table," as it is sometimes called, has been part of the registration procedure for as long as I can recall. In the early days, it was where parents dropped off forms they had forgotten to fill out or turn in and signed up their children to attend religious services on the weekends.
It evolved into the "Answers Table." When parents asked where they might be able to purchase something they'd forgotten to bring, what the best route out of C'town was, or where they could get a meal before heading home, CTY staffers would respond, "See that man in the pink shirt? He'll know." (Once an Answer Man, always an Answer Man!)
These days, I sign up parents for their last-day conferences with the instructors, collect forms, and still answer questions. But my favorite part is seeing my prior-year students back for another CTY summer, many of whom have gone through growth spurts in the intervening period.
And, occasionally, there is a long-ago student whose younger sibling is now taking a course. It is a delight to see them again, though there have been a couple of times when "I'm so glad to see you're still here!" came across as "Wow! You're still alive!"
(I guess I deserve that for telling them that I'm the one who told Thomas Jefferson we should buy Louisiana and that I charged up San Juan Hill with Teddy Roosevelt.)