On the High Seas with Alex

We went on a cruise to Bermuda with Chuck, Rebecca and Alex along. Though Laurie and I have been there before, it was a first for the kids.
It's an easy cruise -- leave Sunday afternoon, sail on Monday and Tuesday, spend Wednesday, Thursday and most of Friday in Bermuda, then set sail and arrive home Sunday morning. With Papa and Grandma along to handle some of the babysitting, Chuck and Rebecca got time for some fancy dinners, horseback riding, and general relaxing.
Alex spent an hour or so a day at the kiddy care center, but the rest of the time was spent with his favorite people. And he kept us all busy.
His bed was a foldout, which was fine, but he also liked the large sill in front of the window. He decided it could double as a second bed.

Alex also discovered that the phone in their stateroom could be used to call Grandma and Papa. One evening he called us and said, "I need you guys to come down here because Mommy and Daddy are going out."
One morning he called and said, "I'm going to breakfast and wanted invite you to join me."
Sometimes, it is hard to believe that he is only three years old.

Among the onshore adventures, we all spent a few hours at the nearby beach -- Alex made friends with a boy from the other ship that was docked. There was a playground area that he also liked. But, every time he was asked what his favorite part of the cruise was, he said, "Riding the train."
Said train being the little tram -- dressed up like an old train -- that takes people from the ships around the shopping area of King's Wharf. Every time we started moving, the engineer would shout "Choo choo!" to Alex's great delight.

It was a long time coming this year, especially since the pool has been open for weeks, but the weather and water temperature finally aligned to bring about the First Dunk. 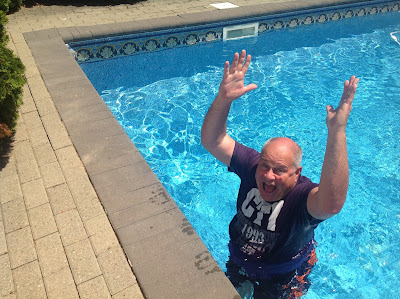 Joining Swannee and Moby the Whale on the Temperature Team this year is Froggy. (To those of you who just thought, "Plunk your magic twanger, Froggy!" from the TV show Andy's Gang, wow, you're as old as I am! If you thought of Smilin' Ed, you're even older than that!)
All three concurred that the water was 72 degrees when I took my dunk. 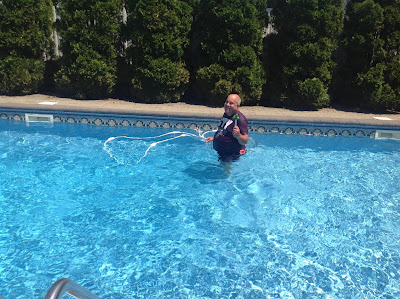 Now if we can just keep moving towards June weather rather than bouncing back to leftover April temperatures...

Lost at the Social Security Administration

I had a 9:45 appointment at the local Social Security office this morning.

This appointment was made in March, after I spent a couple of hours on the phone with the Social Security Administration and the Medicare office, trying to get clarification about what I was going to be charged for Medicare. The calls were the result of getting three letters with three different amounts listed as my monthly payment... plus a bill for an amount that did not match any of the letters.
One of the people I spoke to then, a woman who I would swear said her name was Candy Crush, said of the most recent letter I'd received, "Sir, that amount isn't even one that shows up on our charts!" She is the person who scheduled my visit for "the next available appointment" seven weeks hence.

So, I showed up about ten minutes early for my appointment, with all my letters in a folder, and, because I was expecting a wait, a book to read. When you walk in, a security guard points you towards the "sign-in machine." You enter your social security number, indicate whether you have an appointment, and a ticket with a code number is generated; my number was A73. There were different numbers posted on the video screen -- A's, B's, C's, etc. -- and A72 was currently being handled, so I figured I did not have long to wait.
Indeed, about ten minutes later, I was called to window #1 (one of the four windows in the room), where a woman asked me if I had an appointment. This struck me as rather odd, since I'd answered that question and presumably code the A-code number because I did have one. "Well, I'm officially logging you in now. Someone will call your name." What was the purpose of signing in if I wasn't really signed in?
So I sat. And I read. And I waited. And no one called my name. At about 10:30, a woman came in and she got #A74, something I determined when she was called to window #4 and got the same line about being logged in.
Other people had their names called and went through a door to the back. Some people just got called to windows and, their questions answered or forms processed, went on their way. And I sat. And I read. And I waited.
From where I was sitting, I could hear the man in window #4. He was quite knowledgeable as he dealt with a variety of people and their questions.

At 11:45, I went back to window #1 and asked the woman just how long I had to wait to be called for my 9:45 appointment.
She:"Is this your first time coming to the window?"
Me: "No, you checked me in two hours ago."
She: (typing on her computer) "What's your name?"
Me: "Rozakis."
She: (more typing) "I'm not seeing you here."
She asks me to write down my social security number, which she then enters three or four times. "Maybe your name was called and you didn't hear it."
Me: "I've been sitting here for two hours! I would have heard my name called."
She: "Well, I will put you back on the board, so have a seat and someone will get to you soon."

I went back and sat down, but I could tell she was still trying to figure out how she had wiped me out of the system, as she kept looking at the slip of paper I'd written my SS# on and kept typing it in. She then consulted the man at window #2, but he could not help. Nor could the man at window #3.
However, the man at window #4, said. "I'll handle it."
He called my name and when I came up, said, "I'm going to help you right now."

And he took care of the entire problem in less than five minutes!

Up, Down, Look Around

The past weekend was one that involved a variety of babysitting adventures with Alex.

These included his class field trip to a nature preserve on Friday. Perhaps the idea of three-year-olds turning over rocks and logs in the woods in order to find worms, millipedes, slugs, and other squirmy things needed more thought. Just keeping them together and paying some semblance of attention was a challenge for the young woman leading them. ("It's like trying to herd cats," Laurie pointed out.)
Alex did seem to enjoy it. And we got to meet all of his school friends that we've been hearing about for months now.

A field trip he enjoys much more is going to Home Depot. Not because he is a future home handyman... because they have escaltors!
On Sunday afternoon, Alex, Rebecca and I drove there. Rebecca did the shopping. Alex and I went up the escalator and down the one next to it. While this is great fun for a three-year-old, Papa knew it would get tiresome very quickly. So I added a twist: After each round-trip, we had to go an look at something in the store.
The first time, we looked at all the packets of seeds they had for sale and Alex identified a number of vegetables he likes to eat. Then we looked at the fruit bushes -- raspberries, blueberries, grapes, etc. We examined the various rose bushes and picked our favorite colors. We looked at house plants, hammers, and portable chairs.
Coming down on our last trip, I pointed out what we would look at next. "Mommy!" Alex exclaimed, as Rebecca appeared from the check-out area.
Alex so enjoyed "Up, Down, Look Around" that when we got home, he told Chuck that they would have to play it the next time they went to Home Depot together.
Posted by Bob Rozakis at Monday, May 02, 2016 No comments:

Call me optimistic (or maybe crazy), but we've already opened the pool for the season. Not that the weather has cooperated in the least.  After some signs that we might be getting some early warm weather, it's been cloudy, rainy and downright chilly for the past few days.
And with temps hitting 70 degrees not forecast till sometime next week, it would appear that my annual First Dunk is still some days away. Still, it's nice to look out the window and see water rather than the cover.
Posted by Bob Rozakis at Monday, May 02, 2016 No comments: