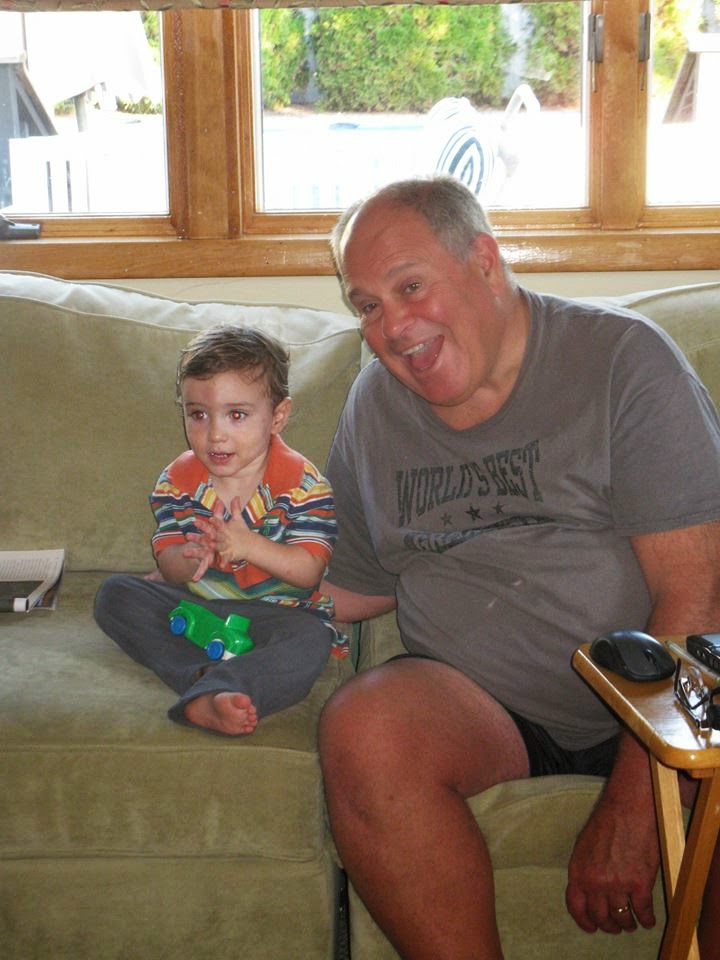 Alex celebrated his parents' eighth wedding anniversary by spending the weekend with Gamma and Gappa, allowing Mommy and Daddy to have a stay-cation. One of the hits of the visit was the "Truck Tunes" video, which he requested numerous times by pointing at the TV and asking for "More trucks." Alex is a particular fan of backhoes and dump trucks. 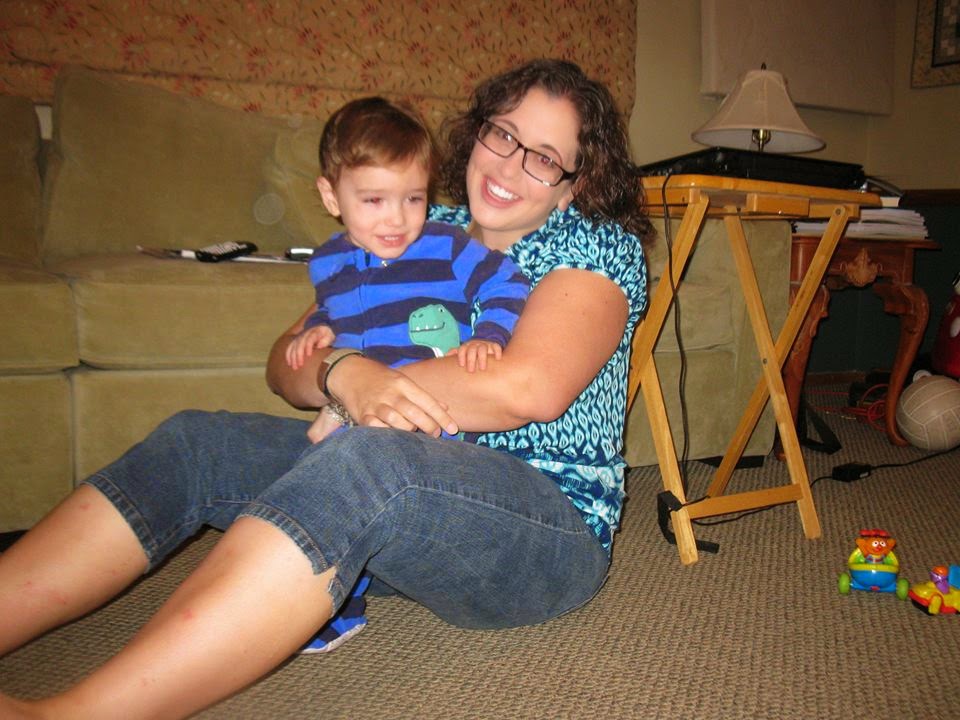 Also on hand for the visit was Aunt Sammi (in town for a wedding), who, knowing Alex's love of bubbles, brought him a Bubble Gun. 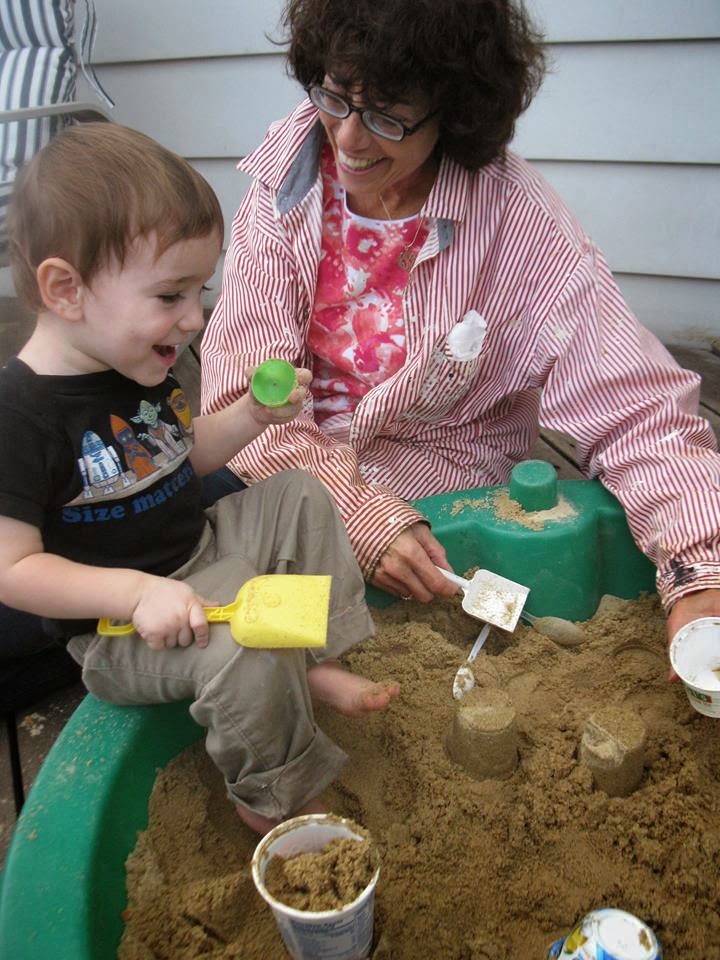 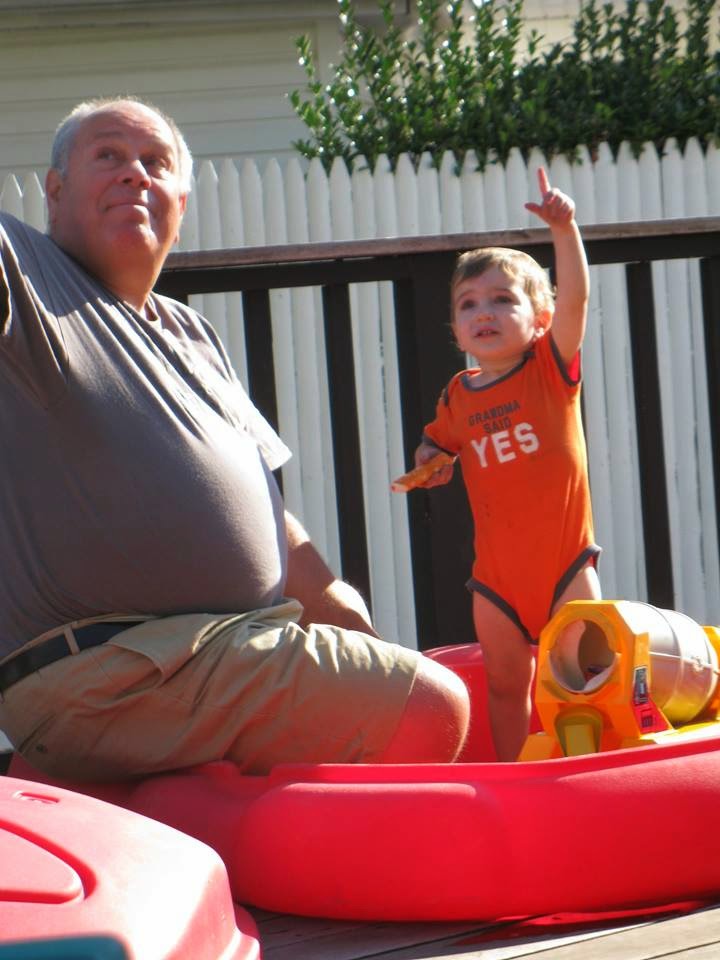 And the beautiful weather allowed for plenty of time to play outside in the sandbox, as well as to look, up in the sky...! (It was a plane.) 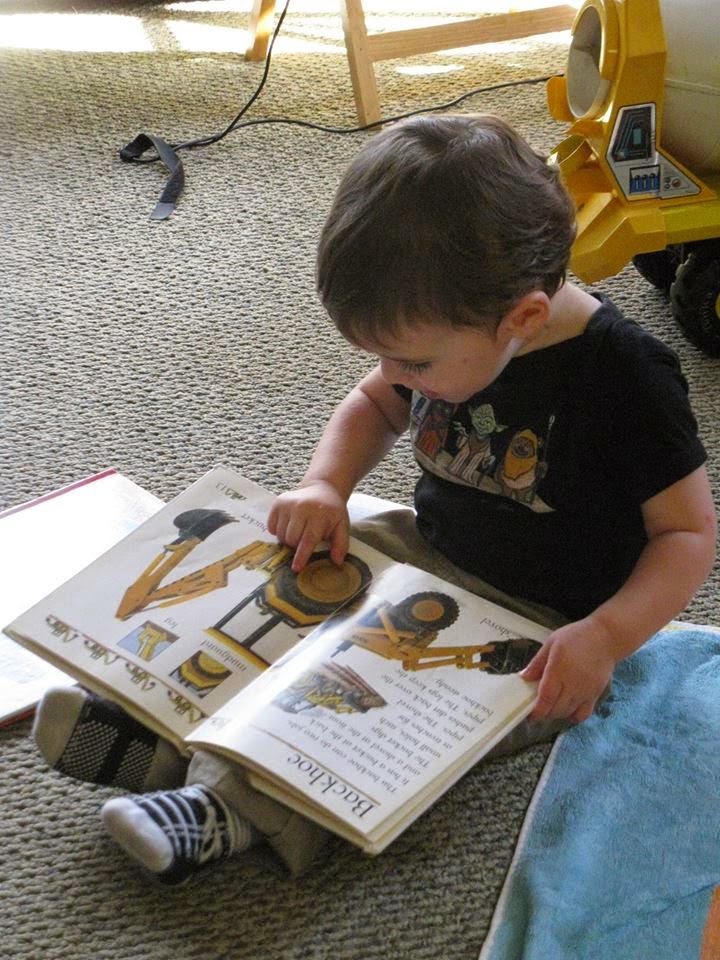 There was also a lot of time to sit and read (mostly books about trucks). "Backhoe!"
Posted by Bob Rozakis at Monday, October 20, 2014 1 comment:

Over in his blog, my pal Bob Greenberger has his comments about Gotham, the show that wants to be for Batman what Smallville was for Superman. You can take a moment to go there and check it out. I'll wait.

I'm sure there are things in the show that annoy or anger regular fans of the Batman comics being published today. What those fans don't realize is that the show's producers really don't care about making the 50,000 of them (if there still are that many) happy.  They are aiming at the millions of people who have seen the movies.

So the rather heavy-handed introductions of Oswald Cobblepot (who walks like a penguin) and Selina ("Call me Cat") Kyle are for movie fans to be able to point to and say, "Hey, I know who that person is going to become." More astute ones will also recognize Ed Nigma, Harvey Dent, and Ivy. But they have no frame of reference for characters like Harvey Bullock and Renee Montoya, so however they are played in the show, well, that's who they are.

That's not to say there aren't some Easter eggs for the longtime comics fans. For example, the waste treatment plant that is to be built near Arkham Asylum. Somewhere down the road, a two-bit criminal calling himself the Red Hood -- or perhaps just some nondescript member of a criminal gang -- is going to fall into the toxic waste there.

All that said, Gotham is much more like the early years of Dick Tracy than a superhero adventure. Gangsters who are just a bit over the top. Crimes that are too outlandish for CSI or NCIS or even Criminal Minds. And a hero who sometimes has to fight the system in order to do his job.

And if you're going to do a series about a city that grows up to be Batman's home town, it's probably the way to go.
Posted by Bob Rozakis at Thursday, October 16, 2014 3 comments:

Columbus Day weekend is usually the end of the pool season for us, so Swimsover has come a few days earlier this season. I had my last swim last week when the water was still about 75 degrees. Then we had an overnight temperature earlier this week that went to the low 40s and that was enough to take about ten degrees from the pool water, too much for the solar panels to replenish during the day.
So I wrapped up the season with a quick dunk on Tuesday and another on Wednesday. Yes, I'm probably crazy, but I always try to squeeze that one more day out of every pool season. And now the cover's on, the floats and rafts and "temperature team" are stowed away... and we'll look forward to First Dunk 2015 sometime next April.
Posted by Bob Rozakis at Saturday, October 11, 2014 No comments:

I became a baseball fan way back when there were only eight teams in each league and the two with the best records met in the World Series. It was not about winning a short series at the end of the season; it was about winning over the long haul, from April through September.

But Major League Baseball, like the NFL, NBA, and NHL, is all about making money. And so we have layers of playoff games, supposedly to keep the fans in many cities excited and interested, but mostly to get more fannies in those more-expensive post-season seats.

So here's my suggestion to MLB: Go right ahead with the current system of getting two teams into the World Series. But after it's all over, take the two teams with the best records and let them play a "Bestest Series." They could play a game or two in each of their home cities and then, like the Super Bowl, play the finale in a predetermined locale.

There's more money to be made here, MLB. Think about it.
Posted by Bob Rozakis at Wednesday, October 08, 2014 No comments: