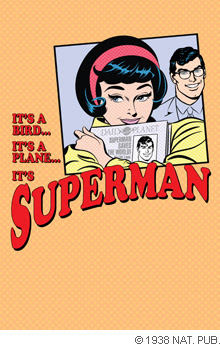 Laurie and I attended a performance of "It's a Bird... It's a Plane... It's Superman" last night. The play, given a five-day Encore run at the New York City Center, was well done and quite entertaining. The cast members, some of whom Laurie has seen in other plays, were not big-name stars, but they were more than worthy of  the cheers and applause they got at the final curtain.

To be sure, this play is not deep drama and the characters are mostly two-dimensional. The Man of Steel is the Super Boy Scout we knew and loved in the 60s; Lois Lane is the plucky yet love-smitten gal reporter. The bad guys are, well, bad guys. (One lyric has them singing, "We're gonna bring back villainy!") Of course Superman triumphs in the end and the audience leaves in a happy mood.

The staging is excellent; the orchestra, which is superb, actually gets more of the stage than the actors. The action goes quite well with a bit of background and minimal props. And there is a bit of fun for longtime comics fans: The "statue" that is erected at the Metropolis Institute of Technology is a piece of art -- from the cover of Superman #16. 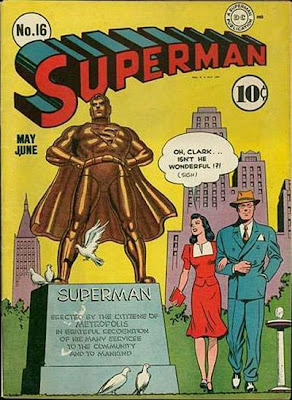 Unlike "Spider-Man: Turn Off the Dark," which has characters swooping around the theater on wires, Superman's flying is done by a cardboard rendition of the character rolling across the stage. In fact, the acrobatics by the members of the Flying Lings are perhaps more impressive than anything in "Spider-Man" because they do it all without any wires.

One disappointing note: The art used on the ads -- as well as t-shirts, mugs and fridge magnets -- has a distinctive Kurt Schaffenberger-esque look to it, but there is no art credit given anywhere. (In fact, the copyright is a rather puzzling "1938 Nat. Pub.") And that means there are probably no royalties being sent.

In his rave review in The New York Times, Ben Brantley calls it "an affable throwback to the old-style song-and-dance show that asked only to entertain you." Indeed, it was two very entertaining hours and well worth seeing if you can get there.
Posted by Bob Rozakis at Saturday, March 23, 2013 6 comments:

Thank you for babysitting me yesterday. I know I didn't do too much sleeping while you were here, but, given a choice of nap time or bonding-with-Grandpa time, it's a no-brainer.

You did a good job understanding me when I was telling you I was hungry, but you need to be a little faster refilling the bottle if I finish and am still hungry. Sorry if I seemed a little peeved about that, but a man's got to eat, you know.

You were also very good at understanding me when I told you my diaper needed changing. I really hate sitting in a wet one.

Mommy and Daddy are bringing me to your house on Sunday afternoon. I hope you have a rocking chair like we do because I really like when we sit together and rock back and forth. And you can tell me more stories about when Daddy and Aunt Sammi were as little as me. 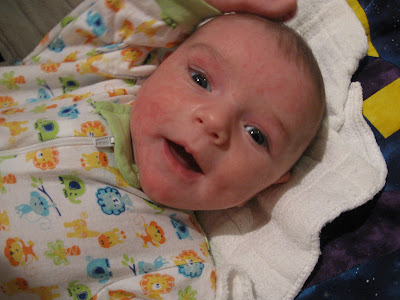 An article in The Daily Beast today cites research that people who sleep less than six hours a night are more likely to gain weight than those who sleep longer.

Is that really much of a surprise? People who are awake eighteen hours a day have more time to eat than those who are awake for fifteen. And it's a fairly safe assumption that those extra three hours of waking time are being spent reading, watching TV or sitting at a computer rather than engaging in any rigorous exercise, so they aren't burning off many calories.

But someone or some organization provided a grant so this study could be made. Just as a grant was provided for research to determine that people who sleep five hours a night tend to be more tired than people who sleep eight.