When the piles of snow in the parking lot at work were still there in the beginning of April, I was wondering just how long it would be before I would be taking the first dunk of the year in the pool. Adding to the extended time frame was the fact that we had to get a new liner installed; tears had started in two of the corners last year and we were able to keep them relatively small with duct tape, but that was not going to work for a full season.

Said liner was installed about ten days ago and the refilling began. Once that was done, we needed our regular pool service guys to come and hook up the filter, et al, which happened this morning. With the temperature this afternoon in the high 70s and lower overall temps forecast for the rest of the week, I decided it was time for First Dunk. The Temperature Team of thermometers pretty much agreed the water was about 72 degrees, which is warmer than it's been in other years.

The combination of Rebecca going to Los Angeles for a conference and Chuck having three days of training programs at work made for a four-day visit by Alex to "Gamma" and "Gappa."
We picked him up Tuesday at lunchtime and he had a nice nap on the car ride home. Then it was time for him to reacquaint himself with the miniature playground Grandma has assembled in our family room, with new additions including a climb-in car and a climb-on motorcycle. The slide remained a big hit, especially when he discovered that blocks and other toys could also slide down it. 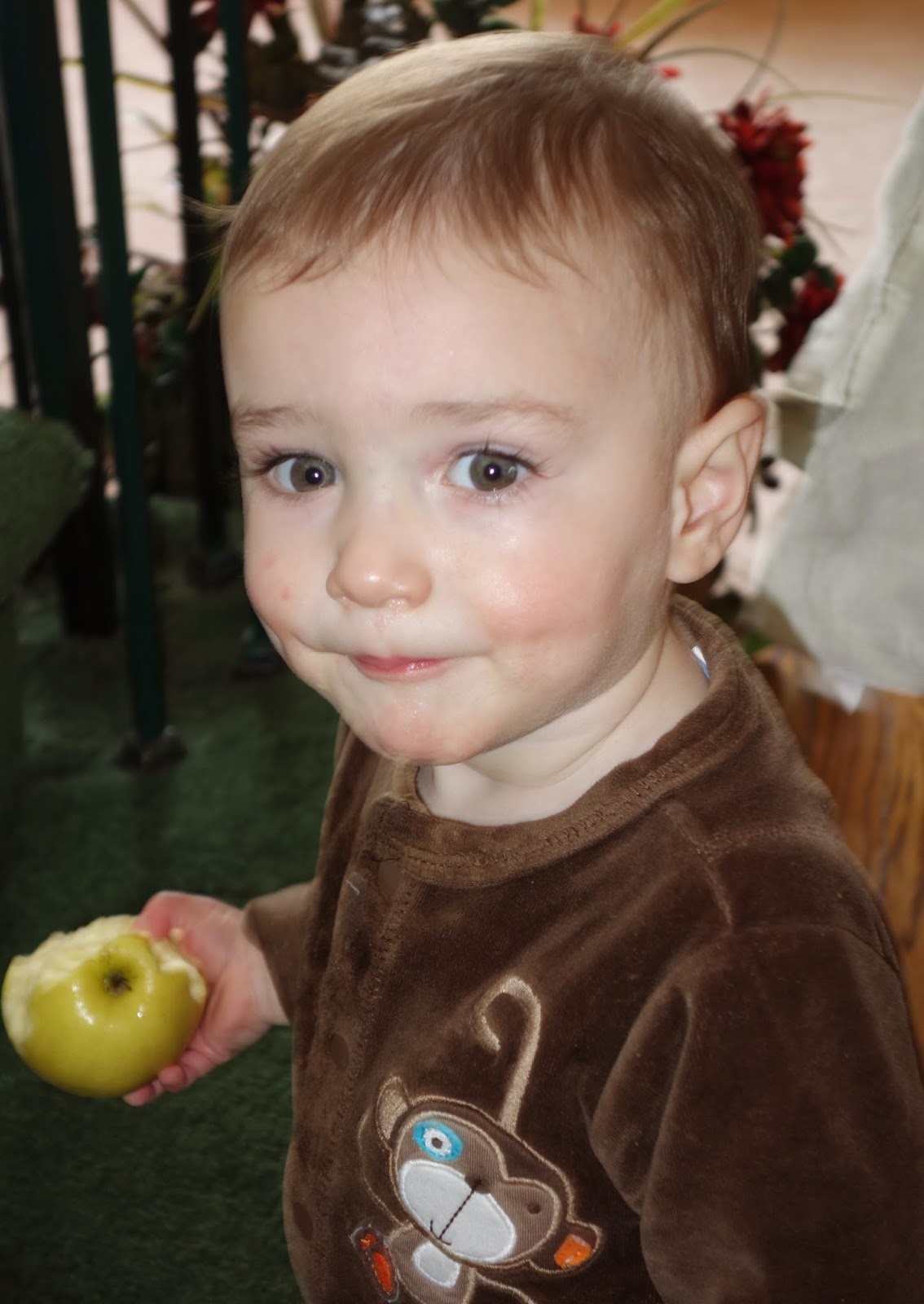 Wednesday was a day with Grandpa, but we were forced to stay inside by day-long rain. From time to time Alex would go to the front door and want it opened. He would look at the rain and, after being told that it was too wet to go outside, went back to his indoor adventures.
Chuck took the train to Farmingdale and stayed over, so father and son got some quality time together. We were quite smug, proclaiming how Alex has slept through the night on Tuesday, as Chuck told us he's been waking up, perhaps as a result of new teeth coming in.
Not so on Wednesday night. He woke up at about 2:30, but seemed to be soothed by a bottle and some rocking chair time with Grandpa. Once back in the crib, however, he seemed to be telling all of his adventures to his blanket monkey, including singing a song and clapping his hands. Eventually, however, he ran out of energy (and stories to tell) and went back to sleep.

Thursday the weather cleared and he and Grandma were able to go to the playground at the park and had a great time. We had two wake-ups Thursday night, one at 10:00, which was resolved with bottle and some rocking. The second, at about 5:00, did not go so easily. In fact, after a bottle and some rocking, he decided it was wake-up time and an opportunity for playing with Grandpa.
So we had some breakfast, put on music (Alex is a big fan of music, which I was supplying on the laptop via online radio, and would go and point at the computer whenever it wasn't playing.), and played until Grandma got up. 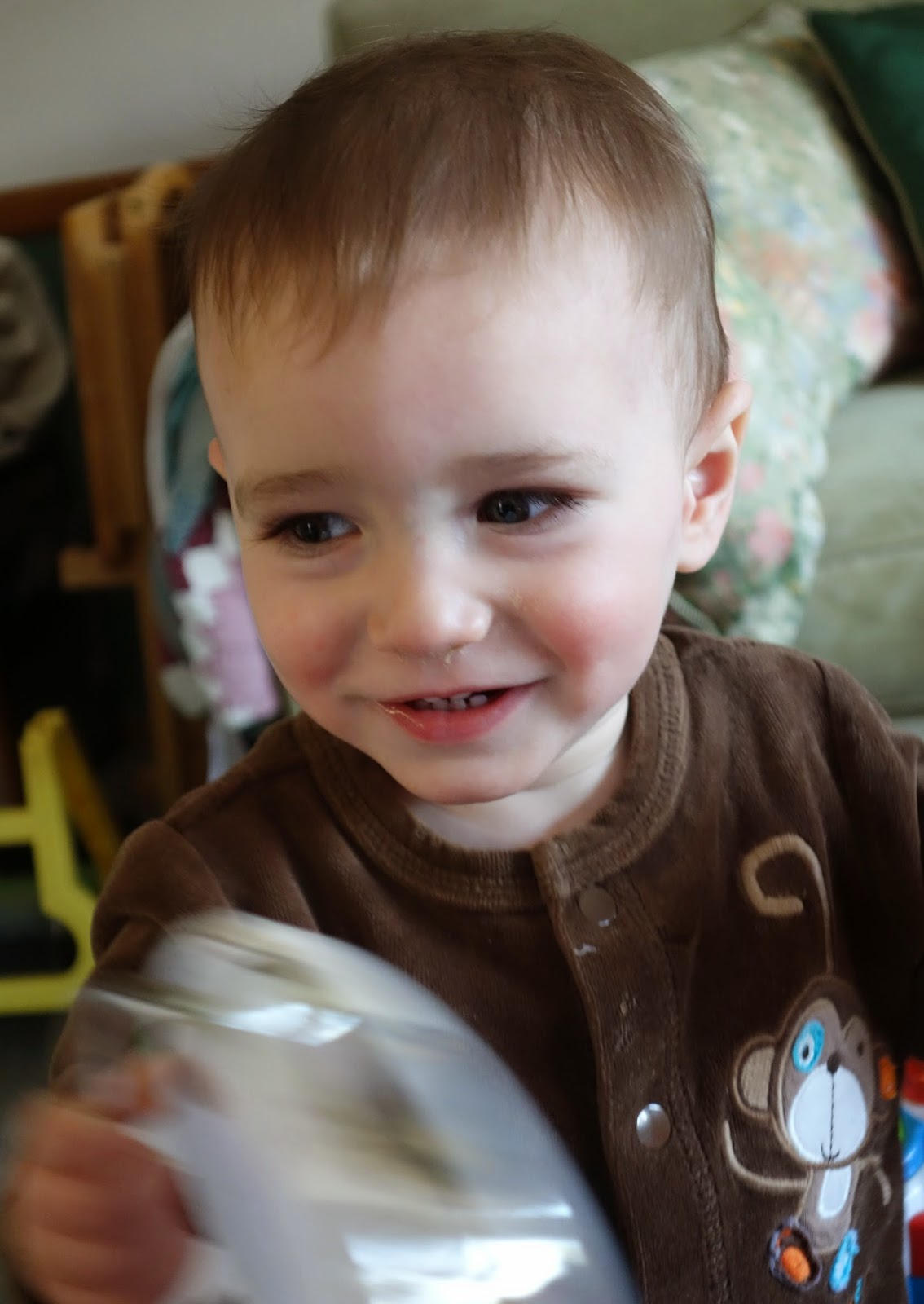 On Friday, Alex had more park / playground fun with Grandma. Chuck once again took the train to Farmingdale for the evening, so we had some bubble-blowing time in the back yard, though Alex seemed more interested in bringing the bubble wands back and forth to Chuck and me than in any bubbles that were actually produced.
Friday night he woke at about 4:00 and seemed determined for a repeat of the previous day's early-morning fun. Thankfully, at least for sleep-deprived Grandpa, Grandma came to the rescue and told both of us it was time for more sleep.
Alex slept a couple more hours and Grandpa was able to get a bit more and then it was time for the drive back to Jersey City where Alex and Chuck were reunited with Rebecca. And when Grandpa got home, he took a long afternoon nap.