Well, it took longer than I expected for it to arrive, but First Dunk 2013, my first swim of the season, finally happened today. When we had a couple of really warm days in early April, I was hoping / expecting that it would lead to my first April swim in a number of years. But then the next six weeks turned back into "early March" and, despite the pool being opened, with the solar panels soaking up whatever sunshine we had, the water temps stayed mostly in the low 60s.
Today, however, with the air temperature in the mid-70s and our Temperature Team of floating thermometers all in agreement that the water had reached at least 71 degrees (72, according to the optimistic CPO Sharkey), I took the first dunk.
Tonight the temperatures are supposed to dip down to the lower 40s, so, I suspect, the water will be back in the 60s tomorrow. But, as the saying goes, one must make hay while the sun shines, which I did... and so the 2013 pool season is officially under way.
Posted by Bob Rozakis at Sunday, May 12, 2013 1 comment:

Iron Man, Iron Man, Does Whatever an Iron Can

Last week, Laurie was named B103's "Listener of the Day" and won a t-shirt (and a chance for the $5,000 grand prize). Okay, so when I heard it announced, the deejay called her "Laurie Roziskis," but we know it was her.
This week, she won a raffle sponsored by I-Con, the Long Island Sci-Fi and Comics Convention Without a Home, and got two tickets to an advance 3-D screening of "Iron Man 3."
Upon hearing this news, Sammi and I had the same response: "Go buy a lottery ticket!" 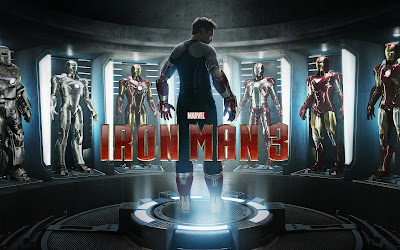 So, last evening, we were in line with a large group of fellow winners (from the I-Con raffle as well as ones run by two other LI radio stations), the vast majority of whom were young enough to be our children, at the nearby theater.
How was the movie? In the words of Laurie, self-proclaimed as "not a fan of the genre" and never a reader of comic books: "Four stars. A hoot and a half! I would have paid to see this!"
And from yours truly, who has read Iron Man from the earliest days in Tales of Suspense through the most of the '90s, "It was lots of fun!" The film's spin on The Mandarin, one of Iron Man's earliest foes, is great, and the continuity among the other Marvel films, most specifically "The Avengers," is reminiscent of the early Marvel days when Stan Lee did his best to make readers feel like all the heroes were existing in a single, consistent world.
One thing I noticed: Like last year's "The Dark Knight Rises," in which Bruce Wayne spent an awful lot of time not being Batman, Tony Stark spends a long stretch of the film not being Iron Man. But the Tony portions of the film are quite entertaining, filled with clever dialogue as well as action that shows you he never stops being the hero.
Two quick notes: The ever-present Stan Lee cameo is a very quick one this time; blink and you might "Miss" it. (Once you see it, you'll get the joke.) And, as always, stay through the twelve miles of credits for the end scene; it's worth the wait.
In conclusion, two thumbs up from us. Go see it.
And while you're doing that, we're going to go get Laurie a Mega-Millions ticket.
Posted by Bob Rozakis at Thursday, May 02, 2013 No comments: