To my great surprise, yesterday was "SuperBob Day" at CTY Chestertown, the culmination of a month of secret planning by Academic Dean Scott Dodd and what appears to have been a small army of co-conspirators, celebrating my 20th anniversary at CTY. 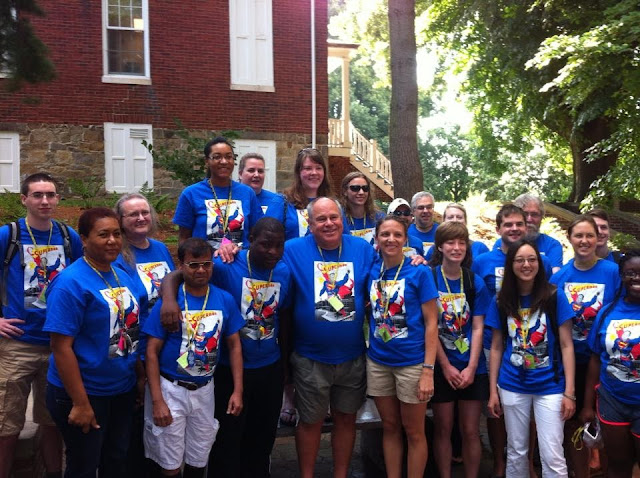 At the morning handoff, I was surrounded by staff members wearing a specially-made commemorative tee-shirt and was lauded by Scott in front of the entire staff and student body for my twenty years of teaching in the program. 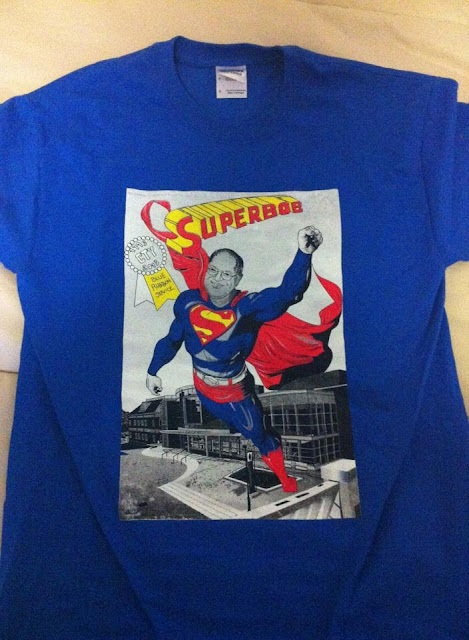 As I told the gathered crowd, when Laurie and I first taught the Writing & Imagination class, I had no idea that I'd still be doing it twenty years later. Now, however, another twenty years doesn't seem so odd to consider. And there's apparently an 83-year-old instructor at another CTY site who has more years than I do...
Posted by Bob Rozakis at Tuesday, July 30, 2013 2 comments:

If the title of this entry had you thinking I would be reporting on this year's convention in San Diego, I'm sorry for your confusion.  No, I wasn't there. In fact, it has been at least fifteen years since I have been to one. During my days as Production Director at DC, I attended pretty much every year from the mid-1980s and well into the '90s, though the memories have all pretty much melted together.

Some of the things I do remember:
* For a number of years, I represented DC at the Costume Parade and chose the winner of the prize for best DC character. I don't recall how I first got involved doing it, though I think marketing department guy Bob Wayne was looking for a volunteer and I agreed. One year, I somehow became Marvel's representative as well, and gave away their prize.
* My pal Bob Greenberger and I were the emcees of the Costume Parade at least twice.
* We used to have regular production meetings at work every Friday. One year, we had those meetings in my hotel room in San Diego; virtually everyone who normally attended the meetings was at the convention!
* When I was hosting a DC Chatroom on AOL, I did live reports from the DC booth. At one point, I was in the booth with two laptop computers side-by-side. I logged onto one using my DC screen name and the other using my personal account, then proceeded to "sing" a duet in the DC Chatroom.
* I missed the 1994 convention because my 25th high school reunion was being held the same weekend.
* In the early years, pretty much all the DC staffers attending would be on the same plane from New York to San Diego. When it occurred to the powers-that-be that, if the plane went down, the company's entire upper echelon would be wiped out, they had people spread out over more than half a dozen different (and some far less direct) flights. I pointed out that they had now greatly increased the odds of having staffers killed in a plane crash because we were on many flights instead of just one.
* I was the moderator of a panel about the Silver Age of Comics one year, with Julie Schwartz as one of the panelists (along with four or five other folks who I do not recall). After introducing themselves, the other panelists never got to say another word. I started by asking Julie, "Tell us how you invented the Silver Age of comics," and he was off and running.  After forty-five minutes, he looked at his watch and said, "I'm having dinner with Gil Kane, so I have to go."
Julie got a standing ovation from the large audience and, as he was standing in the doorway, I said, "But, Julie, you didn't tell them how you came up with Barry Allen's name." (From radio personality Barry Grey and TV star Steve Allen, for those of you wondering.)
Julie did fifteen more minutes from the door of the room, looked at his watch again, and said, "Well, now I'm late. Thanks a lot, Rozakis!" With that, he was gone... and the panel was over.

I'm sure there will be other things I'll remember once I've posted this. Or some of my former compatriots will remind me of some. For now, however, that's my San Diego Comic Con report.

During the three weeks of the session in the CTY Writing & Imagination class, we cover a wide variety of types of writing -- poetry and prose, non-fiction and speeches, advertising and technical writing. There are a few assignments that I enjoy doing along with the students, one of them being "found poetry."

The concept is simple:  You flip through the pages of a couple of magazines and write down any words or phrases that jump out as interesting or intriguing. Leave enough space between them so that you can cut the paper apart when you're finished. When you have a few dozen, cut them apart and lay them out on the table or floor in front of you. Rearrange them, looking for ones that tie together, until you have blocks that work as one. Pass whatever you have left over to others.

To resist amazing evolution
An insult
Still, life can do all that

With the widest of grins
Memory blurs
But pay attention:
A pickle is a pickle!
Posted by Bob Rozakis at Monday, July 08, 2013 No comments: