A Day at the New York Comic-Con

It's been a couple of years since I last went to the New York Comic-Con. I usually find such massive conventions a bit too much after a couple of hours and, after seeking out a few familiar faces and chatting, I head home.

That was pretty much my plan on Saturday. I took a 10:00 train to the city, got to the Javits Center at about 11:15 and figured I'd be on a 2:00 train home. When I showed my badge to a Con employee and he directed me onto a line that snaked down the hill and around most of the building and back again, I was thinking that I might just give up and be on a train at noon. After being on the line -- which, to the credit of the Con personnel moved steadily -- for about ten minutes, I came upon another Con employee and asked if there wasn't some other entrance for the Comics Pros. He looked at my badge and said, "Why are you on this line? You should have gone right in!" He gave me his name, sent me back up the hill, and said to tell whoever I encountered that he had sent me. This time, however, I walked right in.

There were half a dozen old friends who were on my short list of people I wanted to see. A couple of them were scheduled to be doing signings at one booth or another, but otherwise, they would be wandering around like I was. The Archie Comics booth was easy to find once I entered the hall, so I headed there, thinking I might find Paul Kupperberg. Kupps wasn't there, but Michael Uslan was, signing copies of comics and his book, The Boy Who Loved Batman. As Michael and I talked, Kupps and John Workman walked up. Moments later, Allan Asherman and Arlene Lo walked by and joined us, followed by Jack C. Harris.

Sidebar: Back in the very early days of our careers at DC Comics, then VP/Production Manager Sol Harrison decided that we "kids" should put together a company-backed fanzine called Amazing World of DC Comics. He came to my desk and said, "Go get the rest of your pals and bring them to my office." So I went to my compatriots and said, "Sol wants to have a Junior Woodchucks meeting." I was making a joke, using the name of the faux-Boy Scouts that Huey, Dewey and Louie of Donald Duck fame belonged to. But the name stuck...and we became DC's Junior Woodchucks.

So I'd been at the Con for about five minutes and already I was reunited with three of my Junior Woodchuck pals -- Michael, Allan, and Jack. We all talked and laughed for awhile, reminding one another of stories from the old days and deciding that we could start a comic book company -- Old Fart Comics. 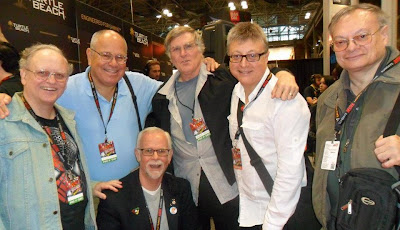 John Workman, yours truly, Paul Kupperberg, Jack C. Harris, Michael Uslan, Allan Asherman (photos courtesy of JCH)
Michael had to depart for a panel and the rest of us headed over to the Kubert School booth to say hi to Joe Kubert. Joe was signing a book when we got there and I said, "Excuse me, Mr. Kubert. If we come to your school, could we get jobs in the comic book business?" Joe looked up, laughed and said, "You? No way!"

Allan, Arlene and Paul then split off for other destinations as Jack, John and I headed to Artists Alley, where I wanted to find my old pal and collaborator, Alex Saviuk. Jack had already seen Alex, so he led the way. After chatting with Alex for awhile, we decided to wander. I still had Marty Pasko and Tony Isabella on my short list of people to find.

We made our way to the DC Comics booth. It has been thirteen years since I left staff at DC and about ten since I last did any freelance work for them, so I did not expect to know that many people there. As it turned out, the only person I did know was editor Karen Berger. Karen gave us another name to add to our list, saying that Len Wein was also at the Con.

Time flew by quickly as we made our way around the Con, stopping to have long or short conversations with Walt and Louise Simonson, Joe and Hillary Staton, Denny and Maryfrann O'Neil, Arvell Jones, Bob Wiacek, Bob Kahan, Robin and Elayne Riggs, Craig Yoe, Jamie Graham, and Mark Mazz. Along the way I was greeted by a fan who had seen my presentation at the Pronto Comics meeting in August and another who had been present when I spoke at a meeting of the comic book fans at Hofstra University about five years ago. And in the "I didn't expect to see you here" department, we were taking a break when I spotted one of the Teaching Assistants from CTY walking by. She was as surprised to see me as I was to see her. 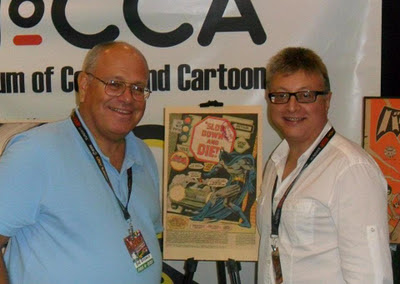 With Michael Uslan with the splash page of our Batman collaboration
At about 4:15, Jack, John and I decided to head back to Artists Alley for another try at finding Marty, Tony and/or Len. Our route took us past the Museum of Comic and Cartoon Art booth, where Michael was signing his book. We stopped for another chat with Mike and he and I posed for a photo with the splash page of the Batman story we collaborated on way back in 1976.

Just as we were talking about the guys we had yet to find, up strolled Tony. He looked at Jack and me and said, "Am I having an acid flashback?" "More like acid indigestion," replied Jack.

While Tony and I chatted, I mentioned that we had yet to find Marty and then glanced up to see him walking right past us. We pulled Marty into our group for another lively conversation about the "old days." 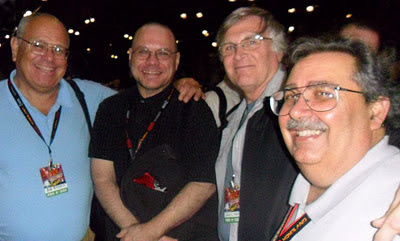 With Marty Pasko, Jack, and Tony Isabella
At about 5:30, the group started to split up for different destinations and I decided it was time for me to head home. So I bid my pals farewell and headed out through the throngs of costumed and non-costumed fans.