Weekend in Washington (and Baltimore)

We drove down to Baltimore this weekend to meet up with Sammi for what has become an annual sightseeing weekend. 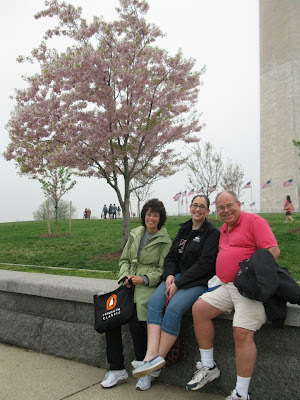 On Friday afternoon we took the light rail from our hotel near BWI Airport into Baltimore, walked from the Camden Yard station over to the Inner Harbor. The temperature was well into the 70s and it felt like summer had already arrived. we made our way to the Aquarium and, on the way, figured out that the most recent one who had visited it was Sammi, who had been there eight years ago. Laurie and I couldn't place our visits, though they had to have been before 1996 when it was much smaller. There was a lot that wasn't there the last time.
After stopping for Rita's Ices, we headed back to the lightrail station, hoping we would still have time for a visit to Geppi's Entertainment Museum. Despite posted hours of 10 to 6, it was locked up tight when we got there at 5:40.
We then waited for the train, missing one because we were not waiting on the correct platform. As a commuter to New York City for twenty-five years, I guess I've been spoiled by the fact that the Long Island Railroad makes announcements and posts train info on boards around the stations. Not so at the lightrail stations; the display signs told us only that we were at the Camden Yard station and what time it was. So the train came and went before we could get around to it. Further, conductors on other trains that passed through had no idea of the lightrail schedule or even which track we could expect the next train to arrive on.
Despite this, we got back to the hotel, went out for a nice dinner, and relaxed for the evening.
On Saturday morning, our plan was to drive to Washington to visit the newly renovated Ford's Theater Museum, after which we would head around to see the cherry blossoms.
Unlike Friday, the weather was not on our side. It was overcast and only in the 50s, with rain in the forecast for the whole day. In addition, when we got to the Museum at 10:15, all the tickets for the day were gone.
Undaunted, we headed to the National Mall, site of the various Smithsonian museums and the monuments. We were well on our way around the tidal basin, admiring the lush pinks and whites of the cherry blossoms, when it started to drizzle. We were armed with umbrellas (thanks to the supply of them Sammi keeps in her car) and soldiered on, making our way to the Martin Luther King and Franklin D Roosevelt monuments.
We stopped to eat our lunch (under our umbrellas) on a park bench overlooking the Korean War Memorial. It seemed fitting since the statues are a troop of soldiers in ponchos making their way up a muddy hill. We then headed to the Lincoln Memorial because, as Sammi said, she "always likes to see the big Lincoln."
The rain was a bit more steady now, so we decided it was time to head indoors into one of the Smithsonian museums, finally agreeing on Air & Space, which we haven't been to in a number of years. It was, not surprisingly, quite crowded.
After a couple of hours visiting exhibits about the Wright Brothers, famous pilots, telescopes, and views of the Earth, we retrieved the car and headed for dinner.
The Sunday plan had been a visit to the National Arboretum, but it was another drizzly gray day and we did not want to make our drive home in damp clothes and shoes, so we bid Sammi farewell and headed off in our opposite directions home.
===
Some takeaway facts from the weekend:
* While awaiting approval of their patent applications, the Wright Brothers would not let anyone see their planes or their blueprints, nor would they let people witness the flights. Potential customers for their planes had to take their word that they actually worked.
* The statue of Eleanor Roosevelt in the FDR Memorial is positioned so that she is looking across the Tidal Basin at the White House.
* The original cherry trees were given to the United States by Japan in 1912, making this the 100th anniversary of the gift. Those first trees are commemorated by a plaque.
* The price of ices at the Rita's at the Inner Harbor are more than twice what they are at the Rita's in Licanthum.
Posted by Bob Rozakis at Sunday, March 25, 2012