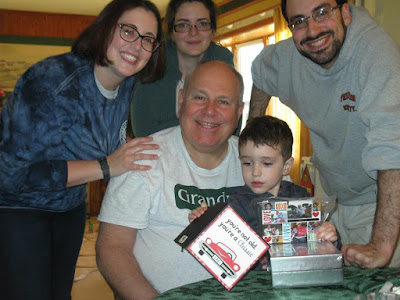 The celebration of my 65th birthday began last Friday night when Sammi flew in for the weekend. Saturday was relatively quiet as we did such exciting things as finish Sammi's income taxes.
On Sunday morning, Chuck, Rebecca, and Alex took the train out for my birthday brunch (waffles with an assortment of toppings) and birthday dinner. It has long been a family tradition that the birthday boy (or girl) get to pick his (or her) dinner and, for the most part, we have fallen into expected choices. (Chuck, for example, opts for a shellfish extravaganza.)
My standard birthday fare has been a large slab of meat -- a prime rib or a rack of lamb chops -- plus Yiaya's Spaghetti (spaghetti with a burnt butter/cheese "sauce" like my paternal grandmother used to make), a veggie or two and a salad. This year I surprised everyone by going off-script and selecting what amounted to a tailgate party.  We grilled up five different types of sausages, added cole slaw, corn on the cob, sauerkraut, and green salad, and even had four different types of mustard. 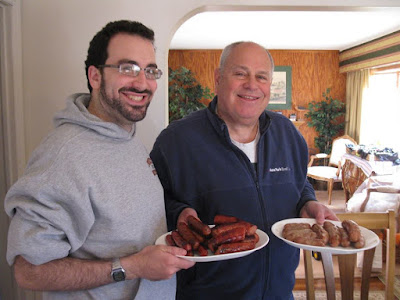 The birthday cake was the traditional babka ("the cake named after me!") with an assortment of other crumb-coated goodies from the bakery. And, just because I was in the mood, a jelly donut! 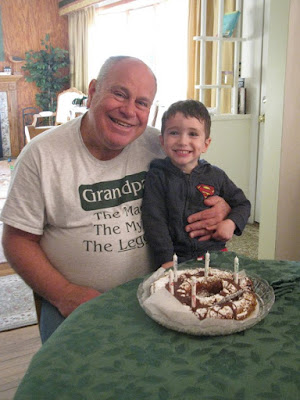 Rebecca had to work on Monday, so she took the train home, but Chuck and Alex spent the night. As usual when the little man is with us, he was up before the birds and wanted Papa to come and play trains with him. Thankfully, he let me go back to sleep for a bit when Chuck took over.
Since Monday was my actual birthday, the celebration extended to additional meals. Chuck and Sammi had both heard about how the Men Seeking Pizza voted Mary's the best pizzeria in Farmingdale (as recounted here) and were anxious to see what the hoopla was about, so I ordered a pie for lunch. Then the three of us headed off to see Batman v Superman (leaving Alex home with Grandma) and afterwards for a snack from Rita's.
Dinner Monday was crab-stuffed fish fillets and then it was off to run volleyball, after which I drove Chuck and Alex back to Jersey City. The traffic gods must have decided to give me a birthday present because we made the round-trip in just about two hours.
After all that, you'd think I would opt to sleep in on Tuesday, right? Didn't happen... but that's another story!
Posted by Bob Rozakis at Sunday, April 10, 2016